Over the years, REVITALIZATION has featured several articles on the trend towards reactivating dead urban spaces, such as alleys and under-utilized parks.

Some communities do it with events. Others with farmers’ markets or community gardens. Still others with food trucks. 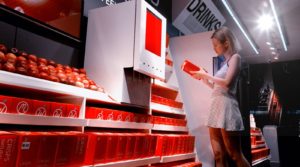 Now, a new technology has been introduced that combines many of these modalities, along with technologies such as solar power, drones, smart phone apps and autonomous vehicles. It can help heal food deserts by instantly turning an empty parking space into a grocery store. It’s called a Moby Mart.

The MobyMart website explains, “The fact that 99% of all stores still have some poor sucker waiting and counting money is utterly bizarre. There are so many better things for retail staff to do that adds more value. Our flagship, the Moby, is staff-less. The doors are opened and closed with an app. It can move around, and is secured using various smart cameras. It is, without doubt, the most high-tech shopping platform in the world today.” 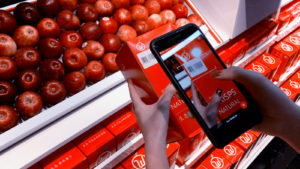 The company continues, “If you want to shop, you enter your credit card, you open the doors and you shop using the app. It is a huge advantage to be able to do this when you want, anywhere. What Uber did for taxis, we do for retail. It also lets us know who is shopping and gathers data. Today, stores have no clue who is shopping. In best case scenarios, 10% of shoppers use some loyalty program. At the Moby, we know exactly how our shoppers interact, what they like and dislike.”

They also explain that the Moby serves as a billboard, and even as a public service: “The entire side of the Moby is covered with a 200-inch screen, and it’s able to show off some cool stuff. The Moby Store can be equipped with outside modules: ATM, mini pharmacy, water dispenser, coffee machine or defibrillator.”

On top of all this, the Moby Mart is solar-powered: panels on the roof power both the display and the electric servo motors.

One of the key functions of operating a retail store is restocking and managing inventory. The Moby keeps track of everything sold, and the system automatically prepares to restock when running out of important items. There’s no need for transferring goods from trucks; instead—being mobile—the entire store runs back to the warehouse to restock, or even dock with other Moby Mart’s to refill. For example: One Moby is out of batteries, another is out of cream. Since the cloud knows where they are, it can help them find a place to meet and exchange products. The company has several patents pending on this technology.

But solar panels aren’t the only modern technology lurking on top of the Moby Mart. It will also have four drones deployed on the roof. A smaller selection of products will be available for automated packaging and drone delivery. Deliveries can thus be made in matter of minutes. In the future, larger drones will be available so that customers can order bulkier items from the Moby Mart.

Of course, no discussion of a new vehicle (which is what a Moby Mart is) would be complete without a mention of self-driving. The Mobys are currently either driven by a driver or by remote control.

If needed, the Moby Mart can follow a defined route and operate different places during the day: Train station in the morning, business center for lunch, football stadium in the evening. The app will always tell customers where the closest Moby Mart is located. The Moby Mart can also be manually operated, if that is preferred.

The first iteration of the Moby Mart was deployed in Shanghai in December of 2017. They will be made available for sale to entrepreneurs worldwide as soon as self-driving solutions become locally legal. The Moby Mart is built by Wheelys Inc., based in Sweden, in a cooperative agreement with Hefei Technical University and Himalafy.

All images courtesy of Moby Mart.