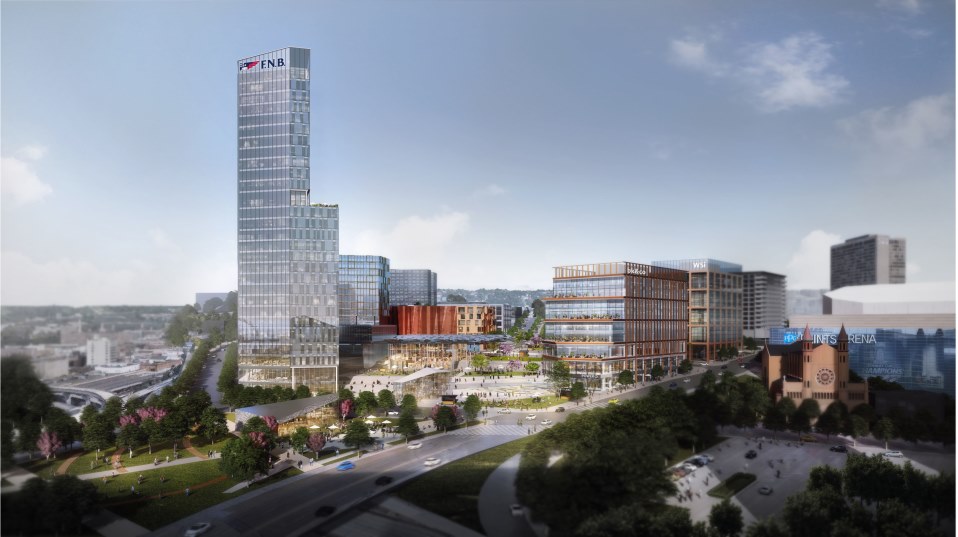 On January 11, 2021, Pennsylvania Governor Tom Wolf announced that F.N.B. Corporation will enter into a joint venture with Pittsburgh Arena Real Estate Development LP and the Buccini/Pollin Group to develop the FNB Financial Center, a 26-story, 547,888-square-foot office tower in Pittsburgh.

The redevelopment project is expected to create 160 new, high-paying jobs, and the company has committed to investing more than $220 million into the project.

The site would reconnect and help revitalize the historic Hill District neighborhood, which was severed from the central business district by earlier bad urban planning. The developer has committed to achieving more than 45 percent MWBE (Minority/Woman-Owned Business Enterprise) participation in the total development effort.

As documented earlier here in REVITALIZATION, Pittsburgh Arena Real Estate Development LP is the development arm of the Pittsburgh Penguins, and they had to have their arms twisted (for 13 years!) by Pittsburgh mayor Bill Peduto to take a revitalizing, socially-responsible approach to redeveloping this property.

“FNB’s decision to maintain its headquarters in Pittsburgh is a testament to the city’s status as a headquarters-friendly location, and this development will provide a critical anchor to a major redevelopment site in the City of Pittsburgh, strengthening local talent attraction and retention efforts,” said Governor Wolf.

“This development will provide more than just a safe, state-of-the-art working space for thousands of employees in Western Pennsylvania, it will benefit the surrounding community and actively engage minority and women-owned businesses in the area,” he added.

FNB Financial Center will be the first office tower built in the city of Pittsburgh since 2015. The tower will be built on a portion of the 28-acre Lower Hill Redevelopment site in the city of Pittsburgh on the site of the former Civic Arena. The building will include 471,890 square feet of Class A office space, 20,000 square feet of retail space on the first floor, and two floors of parking.

FNB will consolidate headquarters staff into the new tower.

This project would be the first development on the site, creating the potential to catalyze other much-needed developments. The mixed-use facility is expected to open in 2023.

The design of the building will focus on both sustainability and health. State of the art technology will be employed to reduce the spread of viruses and airborne pathogens. Enhanced filtration systems, ultraviolet lights and Bipolar Ionization will all be implemented, and the filtration system is comparable to the types used in medical office spaces.

In the funding proposal from the Department of Community and Economic Development (DCED), FNB was encouraged to apply for $10 million in Redevelopment Assistance Capital Program (RCAP) funding.

The project was coordinated by the Governor’s Action Team, an experienced group of economic development professionals who report directly to the governor and work with businesses that are considering relocating to or expanding in Pennsylvania.

“The FNB Financial Center project launches one of the largest urban development initiatives in the nation and is a catalyst to drive continued growth, innovation and efficiency for our organization and success for our region,” said Vincent. J. Delie, Jr., Chairman, President and Chief Executive Officer of F.N.B. Corporation and First National Bank of Pennsylvania.

“Our project required thoughtful collaboration with state and local government as well as our business partners and members of the community, and we are excited that this development will provide significant value and opportunities for all of our stakeholders,” he continued.