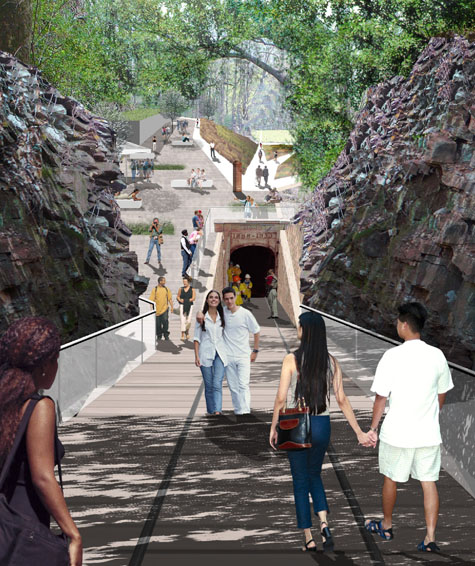 New parks can become agents of gentrification if they are not planned with all of the community.

Often, the unintended consequence of a bright, shiny new park planned with only part of the community can be a change in community identity, so parts of the existing community no longer recognize their own neighborhood. Improved park amenities can also also spur new development, higher rents, and, eventually, displacement.

But “there are also projects that can break the sequence of negative outcomes,” explained Janelle Johnson, ASLA, a landscape architect with Hoerr Schaudt Landscape Architects. “Whose change and what change — these are questions that landscape architects can help communities answer.”

If done well, new parks can instead act as agents of community building, forging new connections that help break down racial and class barriers. 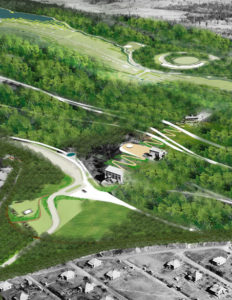 For instance, Birmingham, Alabama is still dealing with the aftermath of its long history of institutionalized racism. As de-segregation of all public schools, facilities, and transportation systems slowly became national policy in the 1950s and 60s, Birmingham’s city government fought it as much as they could.

“They closed parks instead of integrating them,” explained Eric Tamulonis, ASLA, a partner with OLIN. While African Americans made up 40 percent of the city, they had only been given a few small parks. When those were shut down, “kids played in the streets.”

Now with a new 4.5-mile-long Red Mountain Park on land US Steel donated to the community, we are “building community in the park. It’s a bridge across the divide,” Tamulonis added.

A new walking bridge called the “walk of unity” will end in a mine, where visitors can learn about the cultural history of the industry. “Noble mining structures are being restored, and there are reforestation efforts,” he continued. Throughout, there will be educational moments, including recordings of oral histories conducted with miners.

Tamulonis worked on the community planning effort while at WRT, and said the Red Mountain Park Commission is “committed to equitable development.” 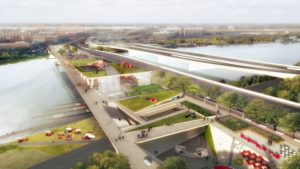 Readers of REVITALIZATION are already familiar with what might well define the future of equitable park development: the 11th Street Bridge Park on the traditionally-impoverished east side of the Anacostia River here in Washington, DC.

That project—which is a great example of the 3Re Strategy (repurpose, renew, reconnect) in action—is repurposing and renewing an abandoned bridge as a heritage-oriented public park that will help revitalize the Anacostia community, partly by connecting it to the newly revitalized Navy Yard area on the other side of the river.

They are also turning derelict riverfront land at the base of the bridge on the east side into a land-based park. You can read more about the 11th Street Bridge Park project in this Guest Article (exclusive to REVITALIZATION) by the project’s leader, Scott Kratz, along with Adam Kent, Program Officer in the DC office of the Local Initiatives Support Corporation (LISC). .

All images are renderings from the master plan for Red Mountain Park in Birmingham, Alabama (courtesy of WRT).

See full article by Jared Green in The Dirt.