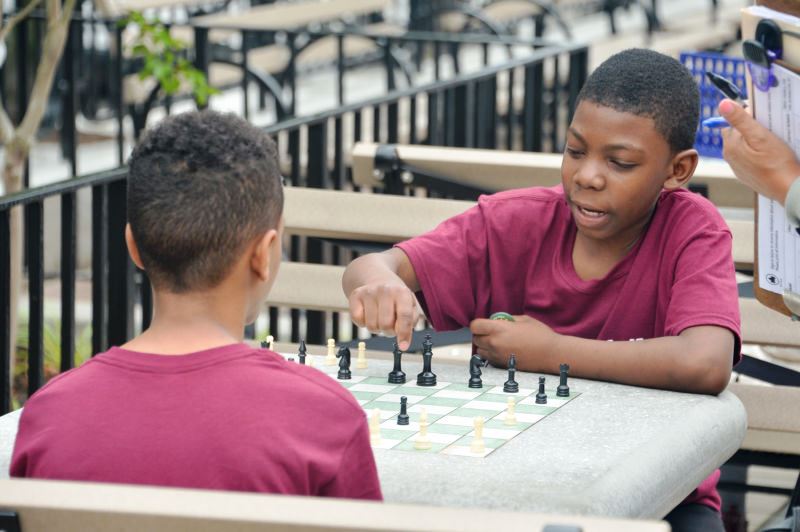 A part of the ongoing Community Parks Initiative (CPI), June of 2019 saw New York City complete the renovation of two community parks and playgrounds in the Bronx: the $3.37 million reconstruction of the Hunts Point Playground and the $8 million revitalization of the Saw Mill Playground.

Launched by Mayor de Blasio in October 2014, CPI strives to make NYC Parks a more equitable and accessible parks system by investing in smaller parks that are located in New York City’s densely-populated neighborhoods with higher-than-average concentrations of poverty. Through CPI, the City is investing $318 million in capital dollars to make renovations to 67 parks citywide that have not undergone significant improvements in decades. 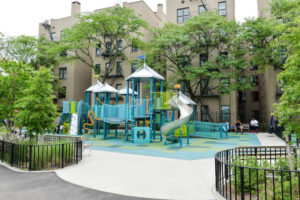 The project was funded by $6.6 million from Mayor Bill de Blasio and a $1.4 million allocation from DEP for green infrastructure that will help to improve the health of the Harlem River.

“We are elated to cut the ribbon on the transformed Saw Mill Playground. With the new amenities and features, we are confident it will be a community hub,” said Rodriguez-Rosa. “We just want to thank the Mayor and our partners at DEP for this critical investment that improved the park and the quality of life for this community. We look forward to unveiling the brand new comfort station in the fall.”

“DEP is proud to be a partner in NYC Parks’ Community Parks Initiative which is transforming neighborhood parks across the city,” said NYC DEP Commissioner Vincent Sapienza. “We are always looking for ways in which we can reduce the stormwater that enters our sewer system and we were able to do just that with this project at Saw Mill Playground. The newly installed green infrastructure at this playground will help to reduce stormwater runoff, improve the health of the Harlem River, and beautify the neighborhood.” 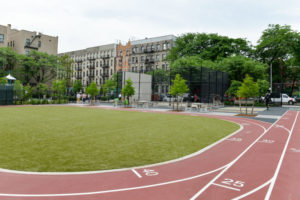 To manage stormwater runoff, green infrastructure has been added throughout Saw Mill Playground, which, combined, are able to capture 1.3 million gallons of stormwater every year.

This playground is named for the Saw Mill Creek—also known as the Mill Brook—which once flowed by this parkland. The creek originated in Gates Place in the North Bronx, ran along what is now Brook and Webster Avenues, and emptied into the Bronx Kill. Sawmills flourished along the many tributaries of Bronx waterways for more than two hundred years.

The early sawmill, devised in 1352 in Europe, was dependent on water as both a power source and a means of transporting goods. Logs were floated downriver to sawmills, which cut raw lumber into standardized shapes and sizes for building purposes. Another byproduct of the sawing process was wood pulp, from which paper is made. Due to the abundance of lumber and waterpower in the Hudson River Valley, sawmills became a popular and lucrative industry for 17th Century European settlers. 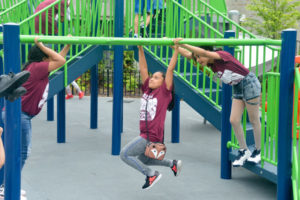 “This revitalized playground is not only a wonderful community space, but its new green infrastructure will play an important role in managing stormwater to reduce flooding and improve the health of our nearby waterways,” said DEP Commissioner Vincent Sapienza. “We thank Commissioner Silver and his team at NYC Parks for being such terrific partners in our efforts to make New York City a greener, more resilient place to call home.”

The project was funded with $2.6 million from Mayor Bill de Blasio, and a $730,000 allocation from the Department of Environmental Protection.

“At NYC Parks, our goal is to create thriving parks for our communities, and we know the upgraded Hunts Point Playground will continue be a beloved community hub in the future,” said Silver. “Thanks to the Community Parks Initiative, this newly transformed park will improve the quality of life for the Hunts Point community.”

To manage stormwater runoff, green infrastructure has been added throughout Hunts Point Playground, which, combined, are able to capture 2.3 million gallons of stormwater annually. DEP has committed approximately $50 million in funding for green infrastructure installations at CPI sites throughout the city, helping to reduce sewer overflows that sometimes occur during heavy rainfall, improve air quality and lower summertime temperatures.

“Thanks to the city’s Community Parks Initiative, the Hunts Point community is celebrating the rejuvenation of the Hunts Points Playground,” stated Salamanca. “Once under-resourced, school children from PS 48 and the local neighborhood will benefit greatly from the significant funding that facilitated the construction of new playground equipment, benches, landscaping and comfort stations. I thank the administration for their commitment to improving the quality of parks across the South Bronx, and look forward to seeing my constituents enjoy this new space as we begin the summer season.”

Hunts Point Playground, located in the neighborhood of the same name in the southwest Bronx, is named for Thomas Hunt, one of the first settlers to occupy the area in the 1670s. One can easily observe the point, protruding out into the East River, on any map of the Bronx.

In 1874, New York City, which at the time included only Manhattan, began to annex sections of the Bronx. Hunts Point, originally part of West Farms in what was then lower Westchester County, became the newest part of New York City. The area underwent significant growth and development after the IRT subway line to Manhattan was built in 1904. Hunts Point is famous for the Hunts Point Terminal Market, the largest produce market in the United States.

All photos courtesy of NYC Parks.