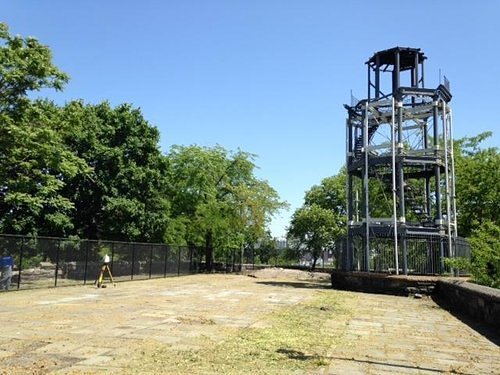 The historic cast iron watchtower at the top of Marcus Garvey Park in Harlem, New York City is getting a new lease on life.

On July 14, 2015, a team from the NYC Parks Department presented plans to the Landmarks Preservation Commission to restore the 158-year-old watchtower, the last of its kind in New York City.

The Parks Department, which has worked on this project for 10 years, already dismantled the watchtower this spring after it was declared structurally unsound. The structure is now being stored at a secure site in Queens, with plans to begin restoration and rebuilding next summer and open the tower in the summer of 2017. “We dismantled the structure successfully, now the goal is restoration while making it accessible to the public and providing security as a park element,” said John Krawchuk, the director of historic preservation for the Parks Department, which will also be upgrading the park’s landscape.

The commission praised the plan, calling it “an amazing” contribution to the community.

The restoration will be paired with upgrades to the surrounding Marcus Garvey Park. Parks plans to reduce and lower some of the surrounding walls in the park to increase visibility, and will consolidate the park’s green spaces. “There will be native plantings over a simple landscape,” said Krawchuk.