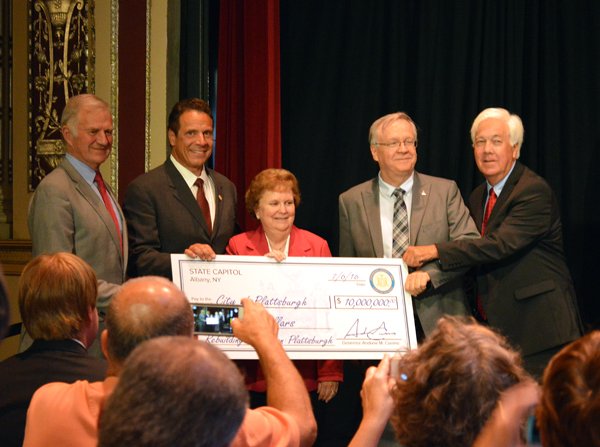 On July 6, 2016, Geneva, New York’s bid to build on its success in revitalizing downtown got a $10 million shot in the arm, delivered in person by New York Governor Andrew Cuomo.

Cuomo announced the city’s winning bid under the governor’s $100 million Downtown Revitalization Initiative. “You hit all the right keys (in your application),” Cuomo told the city. “You did it. Congratulations. You have $10 million for revitalization.”

According to a release from Cuomo’s office, the award “marks a comprehensive plan to transform local neighborhoods into vibrant communities where the next generation of New Yorkers will want to live and work.”

Cuomo also appeared in Plattsburgh, Clinton County, to announce that community as a winner of the $10 million grant. Middletown, Orange County, was also selected.

There will be one winner in each of the state’s 10 upstate economic regions. The grants are part of a $100 million effort that Cuomo outlined in his 2016 state of the state address. One hundred cities statewide applied for the grant program.

The key to sustainability, said the governor, is job creation and getting young people to stay in the city following graduation, where they can commercialize their ideas. “There’s a resurgence and renaissance in urban areas,” Cuomo said. “That is how you really start to put the pieces together to develop real growth.”