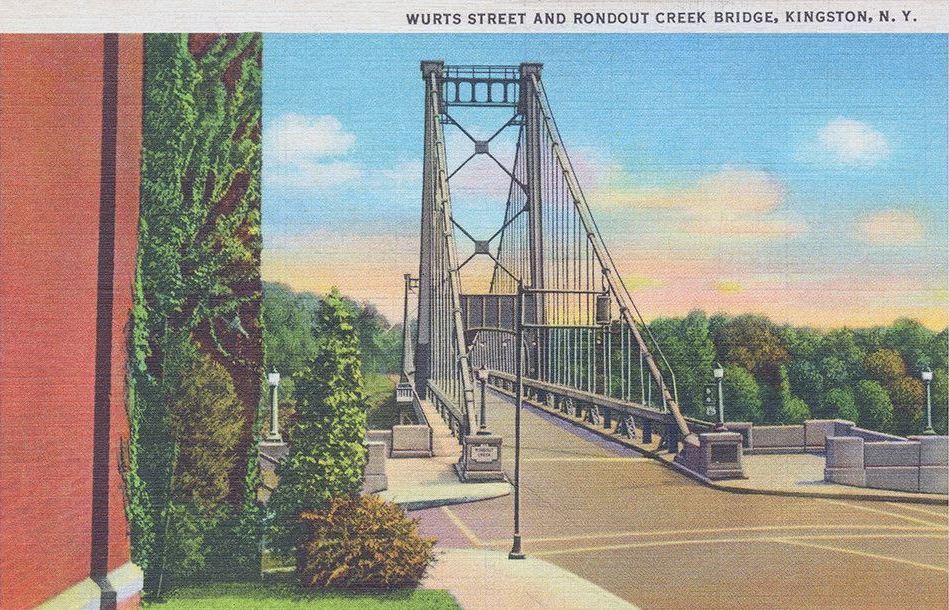 On October 15, 2021, the city of Kingston, New York celebrated $56.2 million worth of transportation infrastructure renewal with the start restoration of a historic century-old suspension bridge and the completion of a traffic-calming, pedestrian-friendly downtown roundabout.

Named a Downtown Revitalization Initiative (DRI) Round 2 winner in 2017, Kingston’s Strategic Investment Plan is guiding revitalization projects that advance the community’s vision for its downtown and can leverage and expand upon the state’s $10 million investment. Funded projects will build upon other recent investments in the downtown and surrounding area to create a sustainable environment for a year-round innovative and prosperous economy.

New York State Secretary of State Rossana Rosado said, “Transportation investments are vital to community revitalization. These infrastructure projects will enhance and help amplify the revitalization already underway through Kingston’s $10 million DRI award. These synergistic investments are building on the vitality of Kingston and supporting the broader renaissance in downtown redevelopment throughout New York State.”

A $44.6 million project getting underway will rehabilitate the historic Kingston-Port Ewen Suspension Bridge, also known as the Wurts Street Bridge, which has been closed since September of 2020. 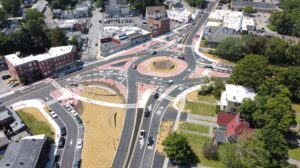 The Wurts Street Bridge project will completely rehabilitate the 100-year-old crossing by enhancing the structural stability of the bridge and re-establishing an important connector between the City of Kingston and the Town of Esopus in Ulster County. Improvements planned for the bridge include a new bridge deck, guide rails, sidewalks, railings and suspender cables.

Senator Michelle Hinchey said, “As the first suspension bridge ever built in the Hudson Valley and the oldest in the Hudson River Valley Region, the Wurts Street Bridge is an important part of our local history that has served as a critical connector between our Kingston and Port Ewen communities. This effort to save Wurts Street Bridge and rehabilitate the beautiful landmark back to its former glory will help create jobs while enabling the bridge to resume its rightful role as a gateway to commerce, recreation, and culture for years to come. The Hudson Valley is an incredibly special place that needs and deserves this level of infrastructure investment from our state. We’re grateful for Governor Hochul’s continued support and excited by the progress to come from all of the revitalization projects currently underway.” 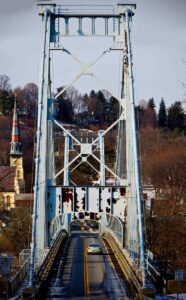 The bridge’s load capacity will be increased to 20 tons and sidewalks will be widened to meet current standards. New paint will also be added, lessening the need for annual maintenance.

“We continue to make ambitious investments in transportation projects throughout New York that are built to last, and these two in Kingston are perfect examples of how we are connecting communities efficiently and safely,” New York Governor Kathy Hochul said. “Project by project, we are moving New York forward and building one of the most robust and versatile transportation networks in the nation.”

The chambers, where the main cables are anchored, will have state of the art climate control systems to control moisture and ensure the anchorages remain free from corrosion. Additionally, the control systems will be enabled with remote monitoring and operation.

City of Kingston Mayor Steve Noble said, “The Wurts Street Bridge is an important piece of history, an iconic and beloved landmark in the City of Kingston and on the Rondout Creek. We’re looking forward to the bridge’s preservation, as the residents of Kingston appreciate being able to walk, bike and connect to our neighbors in Port Ewen. I want to thank Assemblyman Cahill for his help in securing the funding for this major bridge renovation project. I would like to thank NYS DOT and their contractors for their excellent work on the roundabout, which provides a beautiful new gateway into our City while also reducing congestions and greenhouse gas emissions. Governor Hochul has shown her commitment to getting infrastructure work done here in the City of Kingston and I want to thank her and the State for supporting our continued efforts to restore and revitalize our vital infrastructure.”

The popular pedestrian walkway and docks below the bridge will remain open during construction. The roadway below the bridge, Dock Street/West Strand Street, will also remain open, but existing parking spaces will be temporarily closed. Abeel Street on the northern end of the bridge will be reconstructed, requiring a temporary closure of one lane. All work is expected to be completed by fall 2023.

DOT Commissioner Marie Therese Dominguez said, “New York State continues to make critical investments that will create a more resilient transportation network, strengthen communities and improve quality of life. The rehabilitation of the Wurts Street Bridge will restore an important link for Ulster County residents and travelers and, at the same time, add aesthetic enhancements that will cement this bridge’s status as a Hudson Valley icon. Additionally, the new roundabout will reduce congestion at one of Kingston’s most vital gateways and help keep people and goods flowing throughout the Hudson Valley for many years to come.”

The Kingston Roundabout project transformed a busy intersection into a modern roundabout that provides enhanced safety for all travelers and more efficient traffic flow for vehicles at one of the city’s key gateways. New sidewalks, signals and other pedestrian accommodations were also added.

Ulster County Executive Pat Ryan said, “I want to thank Governor Hochul and the Department of Transportation for investing in the rehabilitation of one of Ulster County’s most unique and historic treasures. This significant investment by New York State in the historic Kingston-Port Ewen Suspension Bridge will reopen an important connector and picturesque feature for Ulster County communities.” 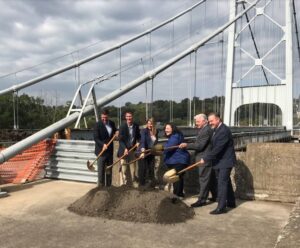 As part of the project, a park-like space was created adjacent to the roundabout between East St. James, Broadway and Albany Avenue. Raised crosswalks, updated sidewalks, a mixed-used path and rectangular rapid-flashing beacons were also installed to enhance accommodations for pedestrians. The beacons provide a high-visibility strobe-like warning to drivers when pedestrians use a crosswalk.

Assembly Member Kevin Cahill said, “On this historic occasion, looking forward to the future, the investment that the State of New York is making in the Wurts Street Bridge will guarantee that this architectural gem remains in place to the betterment of the City of Kingston and the Town of Esopus. I want to thank Governor Hochul and the New York State Department of Transportation Commissioner Dominguez for their dedication to making this project happen for the people in my district.”

Additionally, a storm water treatment system was created onsite to collect and filter runoff, which will help protect the surrounding environment.

Town of Esopus Supervisor Jared Geuss said, “The people of Esopus are relieved that long-term infrastructure funding is finally available for repairs to the Kingston Port Ewen Suspension Bridge. The bridge provides critical infrastructure for emergency personnel, and serves commuters on both sides of the Rondout Creek who use it for everyday travel to earn a living. Its temporary closure resulted in a loss of connectivity, convenience and community vibrancy. We are so glad that the old suspension bridge, which was a source of civic pride in our area, will be restored to its original glory.”

The DOT coordinated with the City of Kingston, Kingston Water Department and the Central Hudson Gas & Electric Corporation to replace and modernize underground infrastructure, including sewer, water and gas facilities.

Historic postcard of the bridge when new by unknown. Unless otherwise credited, all images courtesy of the Office of the New York Governor.