As a city grows – or grows up – the stewards of its future must create pathways to opportunity for – and with – its residents. Given that the country’s wealth gap has widened to a chasm, felt acutely in cities, there is no time to wait.

The good news is that while the inequality gap has expanded, cities are now in a position to close it, and many are working to do just that. While it may be an unlikely choice to some, one city that is taking this challenge seriously is Newark, New Jersey.

Newark is the most populous city in New Jersey, with a population of about 278,000. This makes it the 67th largest city in the country, and the second-largest city in the New York City metropolitan area (just 8 miles west of lower Manhattan). It’s also New Jersey’s second-most racially diverse city, after its neighbor, Jersey City. 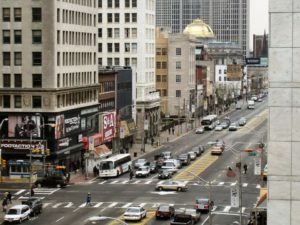 Due to its strategic location, it has long been one of America’s major air, shipping, and rail hubs. The city saw tremendous industrial and population growth during the 19th century and early 20th century. But it experienced racial tension and urban decline in the second half of the 20th century, culminating in the 1967 Newark riots. From that low point, it’s generally been on a revitalizing trajectory since the 1990s.

Newark has thus been positioned for decades at the nexus of inequality and opportunity. A former thriving industrial city, Newark has suffered from decades of disinvestment. In Newark, safety is a grave concern for many, the poverty rate is stark, and historically, opportunities have been limited, with 30 percent of residents living below the poverty line, and an unemployment rate that is twice as high as the national average.

However, once intractable problems are beginning to shift through the collective efforts of the city government and a number of private and public sector institutions. Through the collaboration of many, including Prudential Financial, there is progress toward closing the economic gap, by connecting people to local growth, helping to expand the middle class, and increasing prosperity overall.

As a result of the focused efforts to catalyze the city’s resurgence, Newark is on the rise. There is a visible resurgence taking place due to the collective efforts of the city and key institutions which have been working for years to see it thrive. Here are four keys to their turnaround success:

Other cities – and the businesses and institutions within them – can look to Newark as an example for growth, and start working together. While more work lies ahead, by targeting key social systems and increasing amenities and attractions that add vitality, Newarkers are beginning to see improved quality of life and a path toward long-term economic prosperity.

See article by Lata N. Reddy in the Huffington Post.