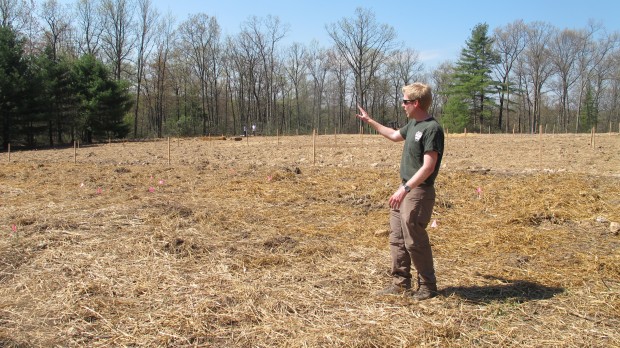 In the seven years since Marcellus Shale gas companies began working in Pennsylvania’s state forests, none of the nearly 1,700 affected acres has been fully restored and put back the way it was before drilling began.

Now state foresters and Penn State scientists are trying to plan for the future and help gas companies figure out the best ways to clean up after themselves.

Kelly Sitch spends a lot of time in the woods, keeping an eye on how gas development is changing the landscape. As a botanist with the state Department of Conservation and Natural Resources, his latest project is studying a one-acre plot of land in the Tiadaghton State Forest.

“We are building a mock wellpad to test different soil and ecological restoration techniques,” he says. ”We want to go from a wellpad that is non-forest, to a reclaimed site, where we’re restoring ecosystem function.”

This clearing in the forest is a scaled-down version of what would likely be left after a gas company has brought in the big drilling rig, finished up the fracking, and put the wells into production.

The trees are gone, the soil is compacted, and there are lots of rocks lying around.

Although Governor Wolf recently reinstated a moratorium on leasing state land for gas drilling, nearly a third of Pennsylvania’s 2.2 million acres of state forest land is already available for oil and gas development– either because of pre-existing leases, or because the state does not own the mineral rights.

The research team will be watching this patch of land for a long time, to see which techniques work best.

It could be decades, or even generations until the state’s forests are fully restored from Marcellus development.