It can be hard to see from the shoreline at Buffalo, New York‘s Riverside Park, but the upper Niagara River is teeming with life.

Not long ago, it wasn’t that way, as nature often took the brunt of change during the industrialized 20th century.

Now it’s a comeback story of the 21st century.

Restoration efforts – envisioned by Buffalo Niagara RIVERKEEPER, financed through the 50-year re-licensing of the Niagara Power Project in 2007 and executed by scientists and engineers from federal and state agencies – are working.

An island, once under water, has been resurrected from the depths of the river.

Native habitats are back on Strawberry, Motor and Little Beaver islands. They are among the eight habitat improvement projects stretching from Tifft Nature Preserve in Buffalo to Buckhorn Island State Park on Grand Island.

In some cases, the results are jaw-dropping. 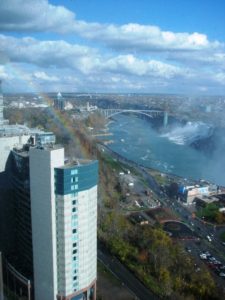 Buffalo Niagara RIVERKEEPER is a community-based nonprofit organization dedicated to protecting the quality and quantity of water, while connecting people to water. We do this by cleaning up pollution from waterways, restoring fish and wildlife habitat, and enhancing public access through greenways that expand parks and open space.

For over 25 years, Buffalo Niagara Riverkeeper has been leading a regional transformation in the rust belt towards a blue economy while bringing together multiple partners, community leaders, and other non-profits to showcase an international restoration model for the Great Lakes. They now have over twenty-one professionals working in 40+ program areas to advance solutions for complex environmental problems.

Historic photo at top is of the Republic Steel plant on the nearby Buffalo River, which suffered similarly to the Niagara River.

See full article in the Buffalo News by T.J. Pignataro.