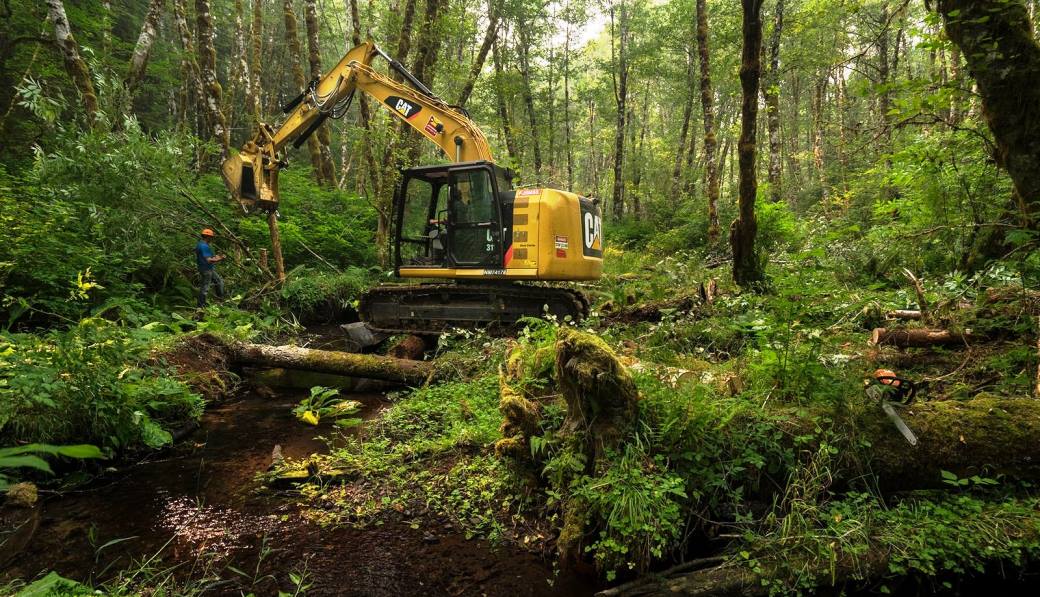 Watershed restoration jobs on the Oregon coast got a big boost this summer and fall as the NOAA Restoration Center awarded the Wild Salmon Center (WSC) $824,000 to support habitat restoration projects implemented through the Coast Coho Partnership (CCP).

The partnership is a WSC-managed team of government agencies and nonprofit partners that works on the coast to recover Oregon’s two Coast Coho populations.

Both Coast Coho populations are listed as “threatened” under the federal Endangered Species Act.

The new funding represents the shared commitment of NOAA and Oregon’s congressional delegation to recover Coho, says Mark Trenholm, WSC Coast Program Director. “Our congressional champions are key to the recovery effort,” said Trenholm. “These funds will improve conditions for wild salmon and support jobs in communities that need them.”

The NOAA award represents the second tranche of a $2.3 million, three-year cooperative agreement between NOAA and WSC to protect and restore coastal watersheds and recover Oregon Coast Coho. Since 2017, WSC and CCP have leveraged nearly $8 million for Coho restoration work across six coastal watersheds, from the Elk River north to the Nehalem.

Projects being funded include:

“Salmon health and the health of our coast go hand in hand,” said Oregon Senator Ron Wyden. “I’m glad to see federal dollars on the ground for essential habitat restoration efforts. Investing in the recovery of wild salmon is an investment in Oregon’s environment, our coastal and Tribal communities and our economy, which is all the more important as the COVID-19 crisis persists.”

For decades, fishing for Coho has been curtailed for Indigenous, commercial, and sport fishers on the Oregon Coast. This has threatened a traditional way of life for local Tribes and cost coastal communities millions in lost revenues.

“The health of Oregon Coast communities is inextricably linked to the health of our coastal salmon runs,” said Oregon Senator Jeff Merkley. “These funds will help fuel the extraordinary grassroots effort to restore coastal watersheds, which also supports jobs in a region that is being severely impacted by the COVID-19 crisis. I will continue doing everything I can to be a strong federal partner in the effort to recover Coast Coho.”

The Oregon coast boasts some of the most intact salmon ecosystems left in the lower 48, according to modeling by WSC and other organizations. As critical habitats are restored, Trenholm said, coastal watersheds become more resilient to climate change, enhancing the viability of wild runs into the future. While Coho-focused, CCP’s projects can also directly benefit Chinook and chum salmon, as well as cutthroat and steelhead trout.

“I’m proud to be a long-time supporter of robust funding for the NOAA Office of Habitat Conservation, funding that helps in the restoration of Oregon’s ecologically-diverse coastal watersheds,” said Representative Peter DeFazio.

“Habitat restoration is vital to increasing Coho and other species’ survival. Not only is this good for fish and the environment, funding stays in the community. The restoration efforts funded by these grants will create dozens of jobs in rural Oregon and strengthen our local economy. I’m proud to have helped the Wild Salmon Center secure this important funding,” he explained.

According to a University or Oregon study, 80 percent of every dollar invested in restoration projects stays in-county, and 90 percent stays in-state. But the ultimate payoff, Trenholm said, lies in the future: restoring the lifeblood of coastal communities by helping them fish again.

“Salmon are an integral part of the culture and ecosystem of the Pacific NW, and we must do all we can to help them survive and thrive,” said Representative Suzanne Bonamici.

“Habitat restoration projects like the work being supported by Wild Salmon Center will protect and restore watersheds to confront the climate crisis and help our salmon populations become more resilient. I’m grateful for the leadership of the Wild Salmon Center, and I will continue advocating for funding to support salmon recovery and restore coastal watersheds,” she concluded.

The Coast Coho Partnership is a team of public and private partners, managed by the Wild Salmon Center, that convened in 2015 to accelerate the recovery of Oregon’s two coast Coho populations. Principal funders include the National Oceanic and Atmospheric Administration Restoration Center, the Oregon Watershed Enhancement Board, and the National Fish and Wildlife Foundation.

Photo of Oregon coastal restoration in action courtesy of the Coast Coho Partnership.