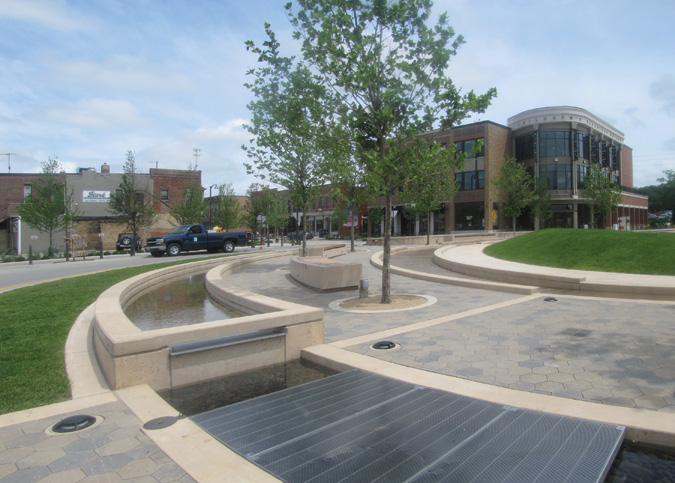 Normal is a medium-sized city in central Illinois. It was one of the first to use TIGER Grants, a then-new, program of competitive federal transportation grants to help implement a city-backed, city-led plan for revitalizing their downtown with a new transportation and civic centerpiece for the town.

It’s now a successful model of exactly the kind of investments the federal transportation program should be supporting, and proof that it’s not always just big projects in big cities leading the way. 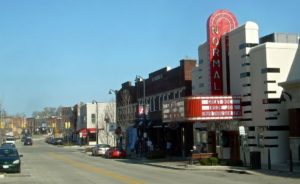 Uptown Normal prior to revitalization.Photo by anonymous via Wikipedia.

Back in the 2009 federal economic stimulus package, Congress created an experimental program of competitive grants that became known as TIGER (Transportation Investment Generating Economic Recovery). It was intended to fund complex, innovative projects that did not fit into existing narrow federal funding silos.

In 2010, Normal, Illinois’ Uptown multimodal station was not only one of the first 51 (of thousands of applicants) to win a grant, but was also the very first to break ground. “We were truly shovel-ready,” said Wayne Aldrich, director of development for Normal’s Uptown redevelopment. Getting to that point, however, took more than a decade.

As in many towns across America, Normal’s development in recent years was pure sprawl, which devitalized its central business district. While most buildings were occupied, rents were low, turnover was high, and the area was beginning to lose key businesses. The city’s leaders and the business community began to rally around a vision to help boost Normal’s core and awaken it into a key asset that could help them compete and prosper economically.

In 1999, Normal hired Chicago urban designer Doug Farr to create a revitalization plan for the downtown, known locally as Uptown. Farr’s plan re-imagined Uptown Normal as a central city plaza anchored by a relocated Amtrak station that would become the hub of several modes and activities. 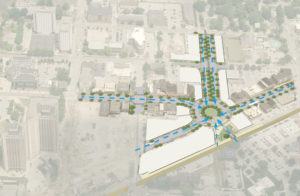 He suggested rewriting design codes so that surrounding buildings would support a walkable center, with active uses like shops or restaurants on the ground floor. And he asked town leaders to stretch even farther, to require that buildings meet green design standards under LEED (Leadership in Energy and Environmental Design), and to use tax increment financing (TIF) to build public amenities like a central plaza to serve as a focal point and gathering place.

“We figured that if we were going to go back into debt, it would have to be for something special,” said Mayor Chris Koos. The city established a quarter-percent sales tax, a four-percent hotel tax, and a TIF district, within which the town would invest a share of rising property tax receipts in streetscapes that paid attention to the needs of pedestrians. The town also used new revenue to build a LEED certified museum, and passed a municipal ordinance requiring new buildings to be LEED-certified.

“We can’t afford not to think about this,” explained Koos, who learned a bit about the bottom line as the owner of a small business in Uptown since 1979. “We have to get more bang for our buck, and single-occupancy vehicles is not that. We have to find ways to carry more people on our transportation corridors.”

But it’s also about providing for residents, he added. “How many families are choosing to go down to one car? For a two-car family with a 30-year mortgage, getting rid of one car is the equivalent of adding a quarter million dollars of buying power over the life of the mortgage,” Mayor Koos concluded.

These days, Normal regularly hosts representatives from many other communities, who come calling to learn the town’s key to downtown revitalization success.