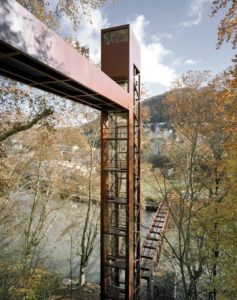 There’s a lot of repurposing and renewing of buildings going on in most cities, but few of them pay as much attention to reconnecting their neighborhoods as they should. Bad planning (or lack of planning) over the past century has isolated many neighborhoods (usually due to urban highways), triggering their decline.

REVITALIZATION often features intelligent cities around the world that are undoing the damage done by urban and highway planners, but that usually involves making (or restoring) horizontal connectivity.

But what about hilly neighborhoods that are isolated more by geography than by bad planning? How can they vertically connect their neighborhoods to help trigger revitalization?

ArchDaily has just compiled eight examples of innovative urban elevators that do exactly that, using what might be called “landscape elevators”.

In Galtzaraborda, Gipuzkoa, Spain, an urban elevator helped reconnect neighborhoods that has sprawled up a hillside over the decades. 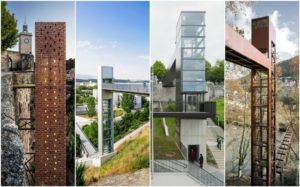 Also in Spain, in the city of Ribadeo in the Celtic province of Galicia, an urban elevator connected the historic district to the port and beach. This made walking to the waterfront far more viable, thus greatly decreasing car traffic which—in turn—boosted the local quality of life.

In Switzerland, the Limmat River separates the town of Baden from the neighboring village of Ennetbaden. An elevator and bridge connected the two towns, not just to each other, but to their shared river.

In Luxembourg, the historic district of Pfaffenthal (a UNESCO World Heritage site) was connected to the upper city of Luxembourg by an elevator, again reducing car traffic that ruins the ambiance of the site.