Notre-Dame Cathedral‘s proper name is Notre-Dame de Paris, which means “Our Lady of Paris“. It’s a medieval Catholic cathedral on the Île de la Cité in the fourth arrondissement of Paris, France.

The cathedral is widely considered one of the finest examples of French Gothic architecture, and it is among the largest and most well-known church buildings in the world. The naturalism of its sculptures and stained glass serve to contrast it with earlier Romanesque architecture. 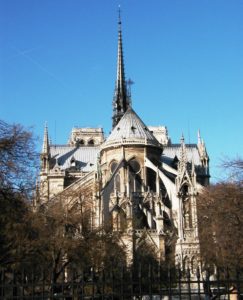 In the 1790s, Notre-Dame suffered vandalism during the radical phase of the French Revolution. Much of its religious imagery was damaged or destroyed. An extensive restoration supervised by Eugène Viollet-le-Duc began in 1845. A project of further restoration and maintenance began in 1991.

Now, the fabric of the Cathedral of Notre-Dame is in desperate need of a thorough restoration. The structure is built of limestone, a porous material that’s highly susceptible to corrosion from today’s acidfied rain.

Although the recently restored western façade is radiant, the same cannot be said of the rest of the building. Maintenance work has been carried out, but it has not been sufficient to stop the spread of conservation problems; there is no part of the building untouched by the irreparable loss of sculptural and decorative elements, let alone the alarming deterioration of structural elements.

Here’s an overview of the restoration challenge:

The attentive visitor only needs to raise his eyes to notice that many of the pinnacles that once gave the building its classic profile have been taken down or are held in place with bindings. Far from being merely decorative, these pinnacles, which appear to be melting because of atmospheric corrosion, play an important structural role, better anchoring the piers against which the flying buttresses thrust. 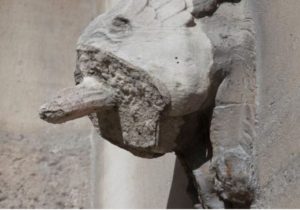 The famous gargoyles of Notre-Dame, all carved in the nineteenth century, and which perform an essential role of projecting rainwater away from the building, have in many places been replaced with unsightly PVC tubes because the stonework was too corroded (and thus dangerous) to leave in place.

Many finials and crockets are missing. The railings, when they have not entirely disappeared (See the roof terrace of the sacristy) are in such bad shape that they require consolidation via fiberglass splints and metal tubing. In the worst cases, plywood boards have replaced missing elements. 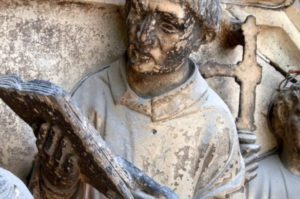 The oxidation of the iron armature that holds the stained glass panels in place is such that it has caused the stone into which it is inserted to crack and in some cases explode.

The poor state of the stonework is particularly problematic with respect to the flying buttresses. Should even one of these structural pylons fail because of the damaged stonework, the consequences would be disastrous.

The lead that protects the wooden spire from the elements, which dates from the mid-nineteenth century, has fallen into disrepair, and because of water damage to the wooden structure beneath, is structurally compromised. The copper statues of the twelve apostles and the symbols of the evangelists are also in poor condition.

A total of $110 million is needed to carry out urgent, intermediate, and longer-term repairs, and even more for a full historic restoration.

Featured 2013 photo is by Livioandronico2013 via Wikipedia.