On July 25, 2018, the province of Nova Scotia, Canada announced that it will invest in revitalizing five iconic tourism sites. The work will enhance visitor access and experiences, and boost the local economy by motivating more tourists to travel to Nova Scotia.

Business Minister Geoff MacLellan said that Peggy’s Cove, Bay of Fundy (including Annapolis Royal), the Cabot Trail, the Halifax waterfront and the Lunenburg waterfront will all receive funding through the new Tourism Revitalization of Icons Program for significant tourism infrastructure projects. 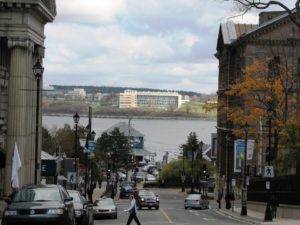 Historic buildings frame view of Halifax waterfront. Nova Scotia Community College (NSCC)—built on a brownfield—is across water. REVITALIZATION publisher Storm Cunningham was lecturing at NSCC when he took this photo.

The province has committed $6 million over three years. “These iconic tourism sites attract travellers from around the world and it’s important we do all that we can to ensure they have exceptional experiences once they are here,” said Mr. MacLellan. “These investments will create more opportunities for private sector tourism operators and help keep our sector growing.”

The program will be administered by Tourism Nova Scotia, the Crown corporation responsible for marketing the province and maximizing the value of tourism to the provincial economy.

Develop Nova Scotia will lead the planning and implementation of tourism infrastructure enhancements at Peggy’s Cove, which will include consultation with community and business stakeholders.

The following amounts have been earmarked for each site over the next three years, starting in 2018-19: