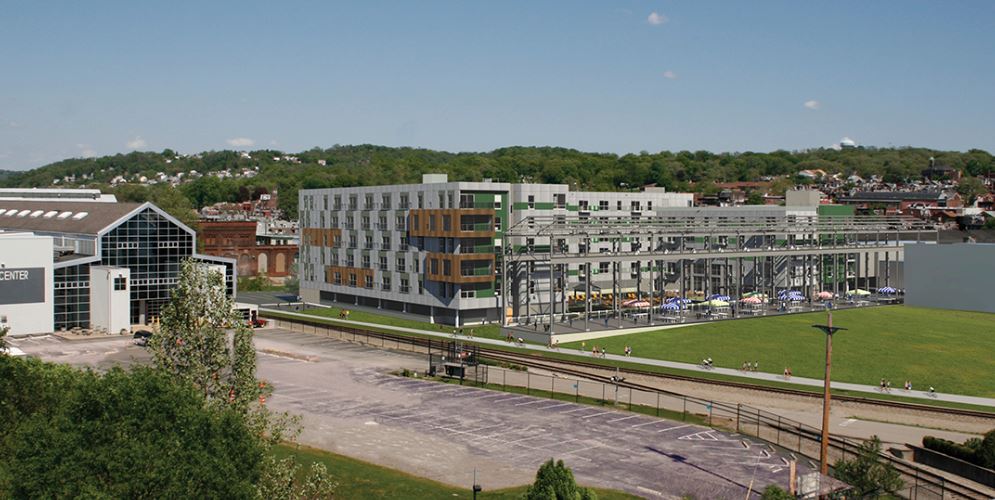 As owner of a shut-down steel plant in the Lawrenceville neighborhood of Pittsburgh, Pennsylvania, Alex Simakas initially tried to lure some other industrial or warehouse users, but interest was minimal.

But Art All Night loved the place, hosting their massive art parties there several times. Simakas encouraged artists to use the site as their canvas.

It didn’t take a lot of insight to see that the neighborhood was changing, and rapidly. “Most of the local real estate folks said, ‘Scrape the site and pack it with residential,‘” recalls Simakas. But that advice didn’t sit quite right, either. Instead, he built the mixed-use Foundry at 41st.

Where once 41st street met a dead-end at the factory, there’s now a clear walking path all the way to the river. That’s called Bay 4, and plans are to pack it with events, from pop-up beer gardens to farmer’s markets and live music. Simakas’ first hire was a “Bay 4 Manager,” Benjamin Herring, to get the programming going. 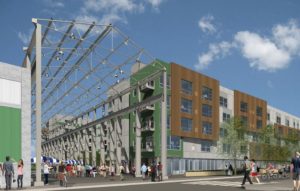 The apartments rise to one side, arranged around a central courtyard filled with grills, pools and other amenities. Whether you love or hate the current fashion for corrugated metal-clad apartments, it does fit seamlessly into an industrial site that’s already clad with a lot of corrugated metal. Architects Rothschild Doyno Collaborative did the design.

From the Foundry at 41st website: Lawrenceville is no longer the “up-and-coming” neighborhood in Pittsburgh, it’s the place to be! The neighborhood boasts a rich industrial history, convenient riverfront location, and welcoming neighbors. It’s where old charm meets present-day edginess. The formerly industrial area has transformed into a trendy, innovative, and according to Business Insider, one of the hippest neighborhoods in the world! Cool shops, restaurants, bars and breweries have made Butler Street a tourist destination, and the local restaurants are establishing the neighborhood as the heart of Pittsburgh’s food scene.

Residents can spend their days window shopping at one-a-kind boutiques that you can’t find anywhere else in the city, like Toll Gate Revival, pavement, No. 14, and Wildcard, catching at show at Row House Cinema, bowling a few frames at Arsenal Lanes, exploring numerous art exhibits, tossing back a pint at Roundabout Brewing, Arsenal Cider House or Industry Public House, or dining out at amazing restaurants like Morcilla, Vandal, Smoke, Piccolo Forno and Cure. Plus the neighborhood is home to Allegheny Cemetery, a stunning, civil war era cemetery that’s more like a park with it’s picturesque trails.

This city neighborhood is less than three miles from downtown Pittsburgh making it an easy and short commute to tons of Pittsburgh employers. On top of that, Lawrenceville is incredibly walkable with community parks and running and biking trails just outside your door. And with gallery crawls, food truck round-ups, beer festivals, farmers markets and other community events, you’ll never be bored! Get a taste of the neighborhood by watching the video below.

Located just steps from Butler Street, The Foundry at 41st offers luxury living in the heart of one of the hippest neighborhoods in the world (according to BusinessInsider.com). Rising from the ashes of the Phoenix Roll Works, the Foundry celebrates Lawrenceville’s industrial roots and evokes the neighborhood’s trendy, urban vibe. Featuring micro, one and two bedroom units and an incredible list of amenities, including high-end apartment features and finishes, beautifully-landscaped courtyard and rooftop terrace, swimming pool, indoor/outdoor fitness area and yoga studio, and pet spa. Plus, apartments are located adjacent to Bay 4, a public plaza for community events developed from a reclaimed architectural artifact.