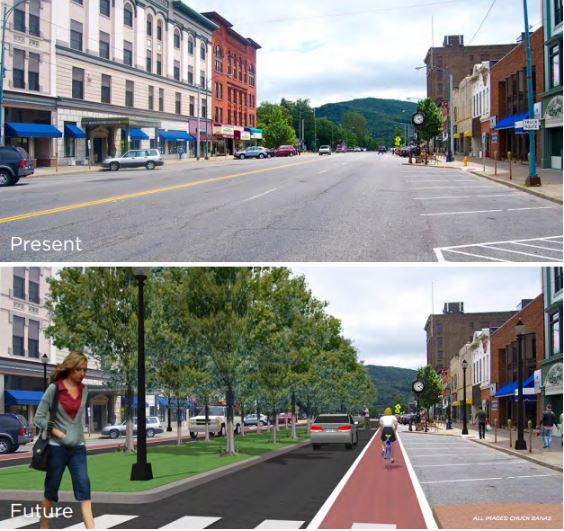 Not all that long ago, civic and business leaders in the city looked up North Union Street and saw a beleaguered downtown decades past its prime. Beginning the road to revitalization was long, intrusive and restrictive to many businesses on the main thoroughfare.

But the $8.85 million streetscape overhaul is over — with the exception of a handful of minor tasks. Officials already appreciate early growth taking place and anticipate future fruits.

In 2011, a Walkable Olean Vision study concluded that: “The City of Olean has beautiful, accessible natural scenery, a thriving college and university, and a grand American main street. The city has the ingredients to restore its civic life, its vitality, and recover its property value. As with many revitalized towns across the country, the best place for Olean to start is with the downtown district, specifically Union Street, the city’s main commercial thoroughfare. Improving the design of this street will enhance citizens’ quality-oflife, raise property values, and encourage investment, as well as make the street easier and less costly to maintain.

The purpose of this report is to foster vision and leadership, including a prompt rejection of the status quo. We confront a stark choice: blight or renewal. Fortunately, there are many successful role models, some very nearby in New York State. And, many of the needed changes are already permitted and promoted by state policy. This report proposes a redesign of Union Street, using the principles and practices of traffic calming. To get started, it will help to define some terms, after which we present a case study of Hamburg, NY, a community that recently calmed and beautified Route 62, the main street through their downtown.

Traffic calming techniques address many of the actual causes of blight and disinvestment by calming and civilizing the behavior of traffic, as well as providing room for all of the other desired social and economic activities of the street. In recent years, many towns and cities around the country and in New York State have used these techniques to transform their streets into vibrant, people-friendly places. Property values have surged. Traffic is calmer. People have returned. These efforts have even increased the amount of vehicular traffic that the refurbished streets can handle.”

An identity is emerging, said Larry Sorokes, CEO of the Greater Olean Area Chamber of Commerce and president of Olean Business Development.

“In the midst of the North Union Street project, we did see several new businesses open up in the downtown shopping district,” said Christopher Michel, director of marketing and communications at the chamber and Olean Business Development. “We’ve also seen a few renovation projects start, such as the one currently underway at the former JoJo’s bar. While the city is now just starting its post-project life, those new businesses and redevelopment projects give hope for the shape of things to come.”