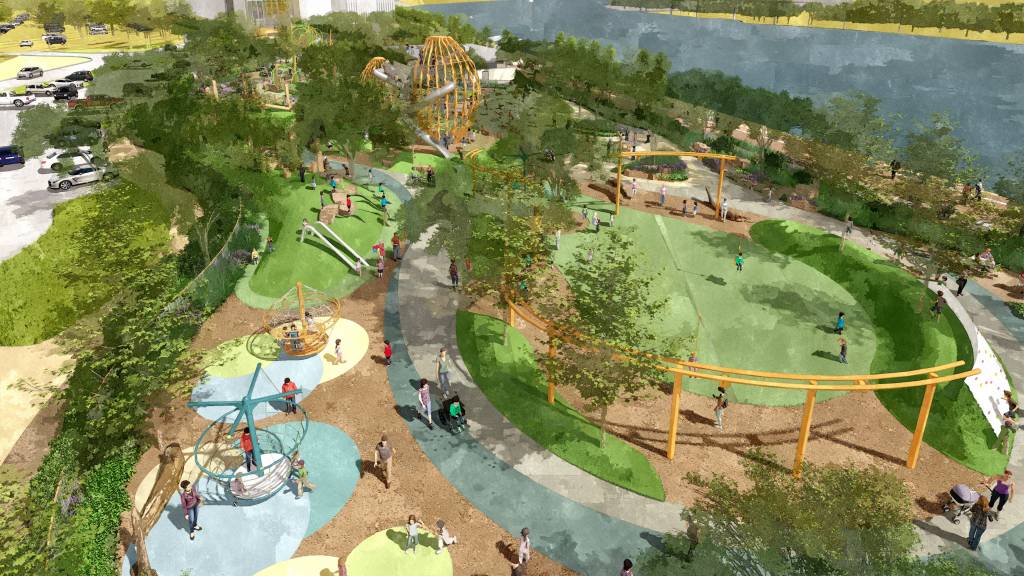 On October 28, 2021, Omaha, Nebraska‘s Riverfront Revitalization Project (known locally as The RiverFront) became the first in Nebraska to earn an Envision® award for sustainability, and even earned a Platinum sustainability rating, which is the highest of them.

The project will transform downtown Omaha along the Missouri River by connecting three parks near the city’s downtown core, including the Gene Leahy Mall (GLM), Heartland of America Park (HOA), and Lewis and Clark Landing (LCL).

Kristi Wamstad, Verification Director at ISI said, “This is the very first project in Nebraska to earn an Envision award, and, wow, did the project team think big! Look at all of the amenities; a person would be hard-pressed to find something not to enjoy. What is also fantastic is that the project team is preserving undeveloped land by only building on previously developed areas. Kudos to the project team for spectacularly transforming the space and earning an Envision Platinum award.”

The project’s goal is to create an iconic riverfront with a variety of functional spaces that will be a catalyst for downtown growth and community connectivity —creating a regional destination that will attract residents, visitors, and businesses to the area. Each park is integral to The RiverFront.

Roger Dixon, President & CEO of the Metropolitan Entertainment & Convention Authority said “The RiverFront project stands out, not only for its dedication to transforming and reactivating space, but for its commitment to the reuse and recycling of materials when possible. From day one, details in design and process have been pillars of this endeavor, which resulted in a first of its kind recognition in Nebraska. Our community can be proud that an already award-winning park is coming to life in the heart of downtown Omaha.”

The GLM is transforming a 14.5-acre site by draining most of the old lagoon and raising it to street level, and ensuring that it can support land-based amenities and activities. Construction is already in progress to install extensive landscaping, including trees, flower gardens, and native plants.

Amenities in the western portion of the park include a sculpture garden, art plaza, canopies picnic area, event lawn, playground, performance pavilion, and a plaza. The east and west portions of the park are divided by a pedestrian promenade, which will improve pedestrian access to and from the adjacent entertainment districts. Amenities in the eastern side of the park also include the following:

GLM connects to the HOA via 8th Street, which is being reconstructed as well to allow for easier pedestrian access between the two parks.

This 21.8-acre park is being regraded to include walking paths, lawn space for activities, a skate ribbon that will accommodate rollerblading in summer and ice skating in winter, and botanical gardens. An existing 10.7-acre lake and fountain will continue to be part of the revitalized park. The project includes extensive landscaping, including trees, native grasses, and flower gardens. Additional amenities and improvements include:

An existing pedestrian bridge connection between HOA and LCL is being incorporated into the design.

This 25-acre park already had walking paths, recreational trails, a marina, a boardwalk, and sculptures. The project is enhancing the area and adding community amenities, including:

Trees, native grasses, and planting enhancements will be added throughout the park. The existing marina and sculptures will remain, and Riverfront Drive is being realigned to allow for easier access from the park to downtown Omaha. A multi-use trail will be located on the west side of Riverfront Drive to extend the trail system to the downtown area.

This project scored exceptionally well in the Envision Quality of Life credit category, earning the highest level of achievement possible for eight credits, and earning an additional eight “bonus points” for innovations, and going above and beyond Envision credit requirements.

For example, this project earned special recognition for implementing a best-in-class children’s environment, restoring community assets and local character, implementing a digital media initiative at the Gene Leahy Mall that will showcase specialized lighting displays during national holidays and local events, and managing public opinion and perception about building a recreational amenity on a capped brownfield.

Stimulating sustainable growth and development by employing a large percentage of local workers throughout design and construction.

Rehabilitating, restoring, and repurposing existing community assets, both in the natural world and in the built environment to improve community attractiveness for businesses, visitors, and residents. Thus, improving Omaha’s prospects for continued sustainable economic growth and development well into the future.

Improving community mobility and access by improving connections among the three parks; setting aside open space at the heart of Omaha’s downtown to prevent urban sprawl; providing ample opportunities for residents to gather (both informally and for programmed events and activities); by adding bike lanes and bike sharing facilities, and by adding pedestrian sidewalks, crosswalks, pedestrian bridges, and walking paths.

Adding a significant amount of public space and a wide variety of amenities as part of this project and improving their safety and connectivity to maximize enjoyment. Community stakeholders, including the public, are overwhelmingly supportive of the additions, which include sculpture gardens, event lawns, art plazas, playgrounds, performance pavilions, and an amphitheater, interactive water features, an area for remote control boats, a dog park, swings, river overlooks, boardwalks, an urban beach, and more.

Preserving undeveloped land and remediating a brownfield. To preserve undeveloped land, one-hundred percent of the project has been located on previously developed areas. The Lewis and Clark Landing, representing approximately 41% of the site, is located on a brownfield site where a lead smelting and refinery company operated for decades. A response action to install a geosynthetic clay liner was started in the late 1990s to cap the contaminated soils and was fully completed in 2016.