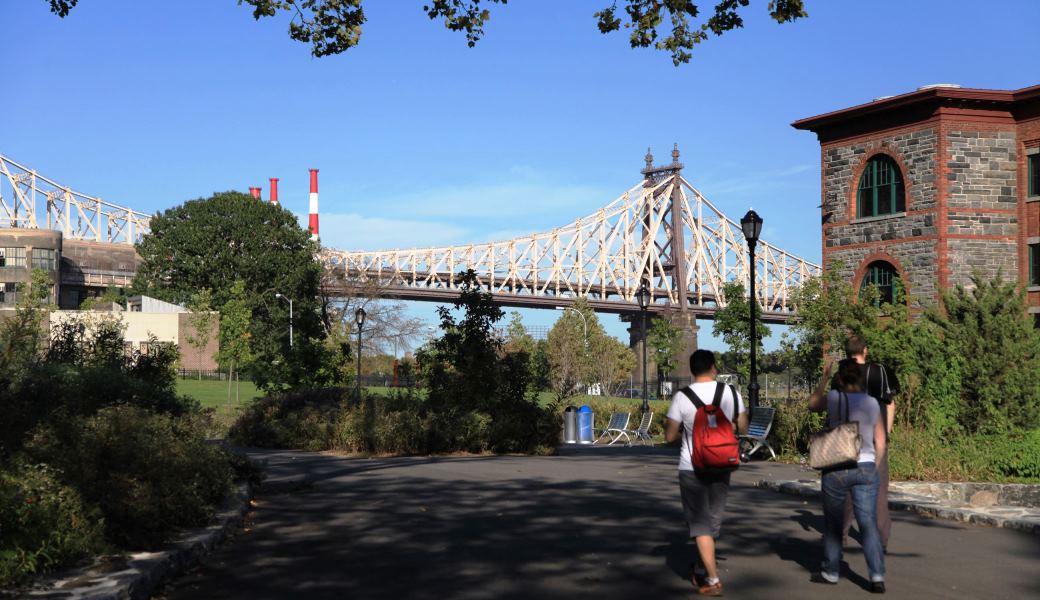 The $11 million revitalization project expands the island’s lookout points with pathways and native vegetation, revitalizing the ecology while boosting the resilience of the park’s shoreline against future storm damage. The project began in July of 2020, and was finished ahead of schedule and under budget. 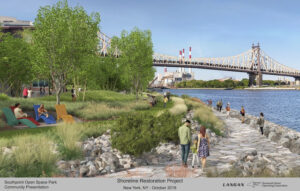 “The reality is that we’re seeing more cases of extreme weather caused by climate change wreaking havoc on our communities, and we need to build up resiliency to this threat,” Governor Kathy Hochul said.

“Not only will Southpoint Park’s new promenades offer amazing views and access to Roosevelt Island’s rich history, but the improvements made to the shoreline will help ensure the island is protected from the impacts of extreme weather for years to come,” she added.

The seven-acre Southpoint Park opened to the public in August of 2011. A year later, Superstorm Sandy swept through New York and caused damage throughout the state’s coastlines, which accentuated the vulnerability of the Island to such storms. 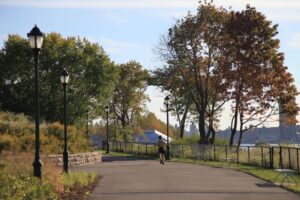 This project includes measures to protect 1600 linear feet of shoreline from events like Sandy and incorporated nearly 34,000 square feet of new, indigenous landscaping that will maintain and encourage wildlife and insects, while providing enhanced scenic views in and around the park.

“Superstorm Sandy showed us how real and devastating climate change can be,” said Shelton J. Haynes, President and CEO of Roosevelt Island Operating Corporation. “The mitigation efforts we took to protect and reinforce Southpoint Park’s shoreline were necessary and forward-thinking. The bonus is, we have created a holistic waterfront oasis at the same time – something we are very proud of and looking forward to our residents and visitors enjoying.”

Additionally, community groups on Roosevelt Island are working with island officials to create educational signage about native vegetation as well as island and river wildlife, all to be displayed within Southpoint Park.

“Our goal was to expand the park’s recreational usage while maintaining and encouraging wildlife in their natural habitat,” said Prince Shah, Assistant Director of Capital Planning and Projects.

“We’re currently working with community members who are focused on sustainability and preservation efforts to create and install educational signs featuring plants and wildlife that inhabit the area,” he added.

Congresswoman Carolyn B. Maloney said, “I have long been an advocate for open spaces throughout New York City, and as the Congressmember for Roosevelt Island, as well as for the Astoria waterfront and East River Esplanade, I know firsthand the urgency of the coastal resiliency and environmental issues that persist along the East River. I applaud Governor Hochul and the Roosevelt Island Operation Corporation for prioritizing Southpoint Park’s waterfront promenades by expanding the lookout points with pathways and native vegetation. Not only will Roosevelt Islanders be able to enjoy this new open space, but it will also strengthen the shoreline against future storm damage.”

Senator Jose Serrano said, “As we confront the realities of climate change, I’m pleased that we are taking the necessary precautions to ensure that the shoreline at Southpoint Park is reinforced, while maintaining existing wildlife habitats. These improvements will not only protect Roosevelt Island from extreme weather, but increase accessibility and recreational opportunities for residents and visitors for years to come.”

Assembly Member Rebecca Seawright said, “I commend Governor Kathy Hochul and Roosevelt Island Operating Corporation CEO Shelton Haynes for prioritizing Southpoint Park with $11 Million in funding for resiliency and waterfront promenades. With the completion of this vital project, residents and visitors can be safe and enjoy some unique Cityscape views that can only be seen from Roosevelt Island.”

Manhattan Borough President Gale A. Brewer said, “I thank Governor Hochul for the state’s investment in making Roosevelt Island more resilient. The project provides an oasis for wildlife and will expand and revitalize the island’s shorefront while providing new lookout points for residents and visitors to enjoy.”

Council Member Ben Kallos said, “There is no place in New York City like Roosevelt Island, and the revitalized Southpoint Park just adds to the beauty of the Island. I am pleased that the revitalized promenades offer much needed protection for the Island’s shoreline from the dangers of future natural disasters and climate events, as well as an enhanced space for residents and tourists to enjoy the history and views of the Park. Thank you to RIOC and Governor Hochul for spearheading this project.”

The Roosevelt Island Operating Corporation (RIOC) was created in 1984 by the State of New York as a public benefit corporation with a mission to plan, design, develop, operate, and maintain Roosevelt Island. With a focus on innovative and environmentally friendly solutions, RIOC provides services that enhance the island’s residential community.