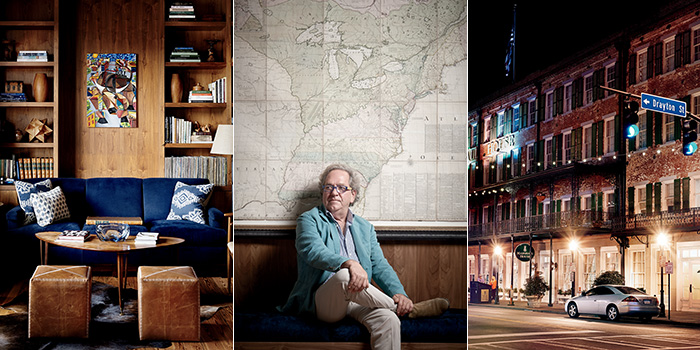 Savannah’s main retail thoroughfare, Broughton Street, has long traversed the historic district with a ragtag patchwork of storefronts, some with tenants and others standing empty and forlorn behind their sagging midcentury face-lifts. The perceptive visitor may get a sense of the street’s former grandeur, but most will notice only the decades of neglect and keep striding past in search of the city’s ample charms elsewhere.

Carter hopes to stop them in their tracks. “Broughton was Savannah’s high street,” says Carter, the Georgia real estate developer who has bought scores of buildings there with the intention of restoring them. Key to his plan: new residences on the floors above the storefronts.

Revitalization requires a delicate balance between preserving the past and building a future, so Carter, along with his wife, Tricia, has put his money where his sales brochure is. The couple were among the first to adopt this kind of city living.

Last year they bought a sun-streaked five-bedroom upstairs loft in an early twentieth-century building with a restaurant on its ground floor. It has become the kind of party house the Carters had always wanted—one with an open enough floor plan for a little spontaneous dancing after dinner.

“The loft we bought is an incredible example of the style of these old buildings,” says Ben, who loves the history in its bones—the heart-pine floors, exposed beams, and irregular rooms.

He and Tricia also love being able to walk across the street to the Funky Brunch Café and sit on the patio and eat pancakes made at the table while their Lab/wolfhound mix, BC, feasts on bacon and eggs. “It all fits the vision of what I think is possible in an urban lifestyle.”