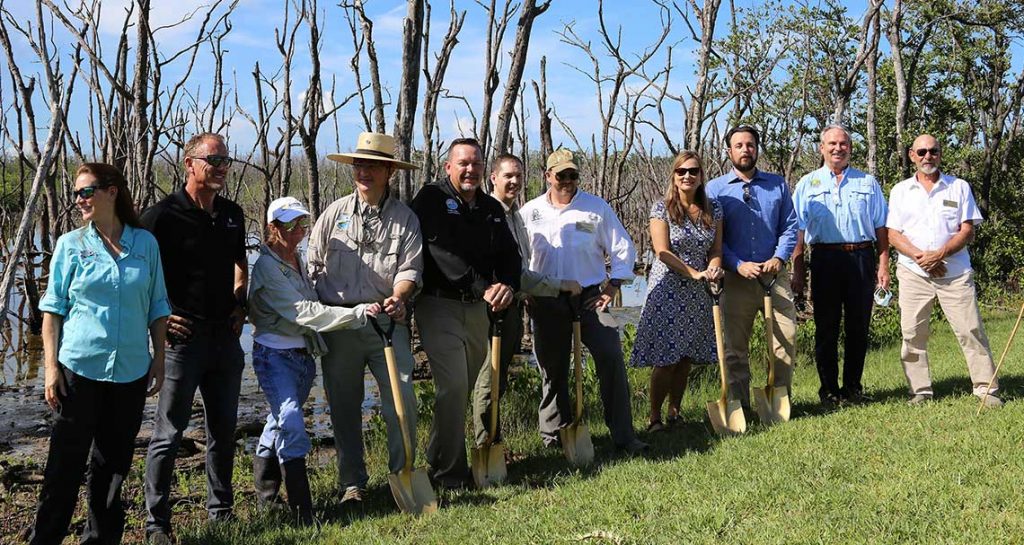 On September 24, 2021 on the Gulf Coast of Florida, shovels were at the ready as staff from the Rookery Bay National Estuarine Research Reserve, the Florida Department of Environmental Protection (DEP) and key partners including the the Florida Fish and Wildlife Commission, the City of Marco Island and the non-profit Coastal Resources Group officially broke ground on the Fruit Farm Creek Mangrove Restoration Project 15 years in the making in Marco Island. 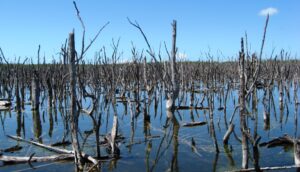 The successful restoration of this mangrove forest will serve as a model for similar efforts in South Florida, the Gulf of Mexico region and the Caribbean Islands.

More than 40 project supporters, local environmental group leaders and citizens were on hand to celebrate the beginning of this project considered the largest mangrove restoration in Florida history.

64 acres of dead mangrove trees and 159 acres of dying and critically damaged forest will be brought back to life decades after roads cut off tidal flows that nourish this important habitat along State Rd. 92 (also known as San Marco Rd) which connects the City of Marco Island to the town of Goodland.

Construction began a week after the ceremony with the installation of culverts under the road to increase the water flow and removal of debris and sediment to restore the forest and the natural beauty of the area.

Mangroves are an important habitat and food source for the bird, fish and other wildlife of southern Florida. They also protect the local community by acting as a buffer during hurricanes and storm surges. In addition, mangroves add economic value through tourism and the fishing industry.

Managed by the Florida Department of Environmental Protection in partnership with the National Oceanic Atmospheric Administration and Florida International University, the Reserve stretches from Gordon Pass in Naples to the western Everglades and is supported by the non-profit Friends of Rookery Bay.

The project includes the installation of underground culverts beneath San Marco Road as well as the clearing of debris and sediment from two historic tidal channels.

Planning and funds for this project were supported by the Florida Resilient Coastlines Program and from a grant awarded by the National Oceanic and Atmospheric Administration (NOAA).

Groundbreaking attendees will include project managers, partners and elected officials.