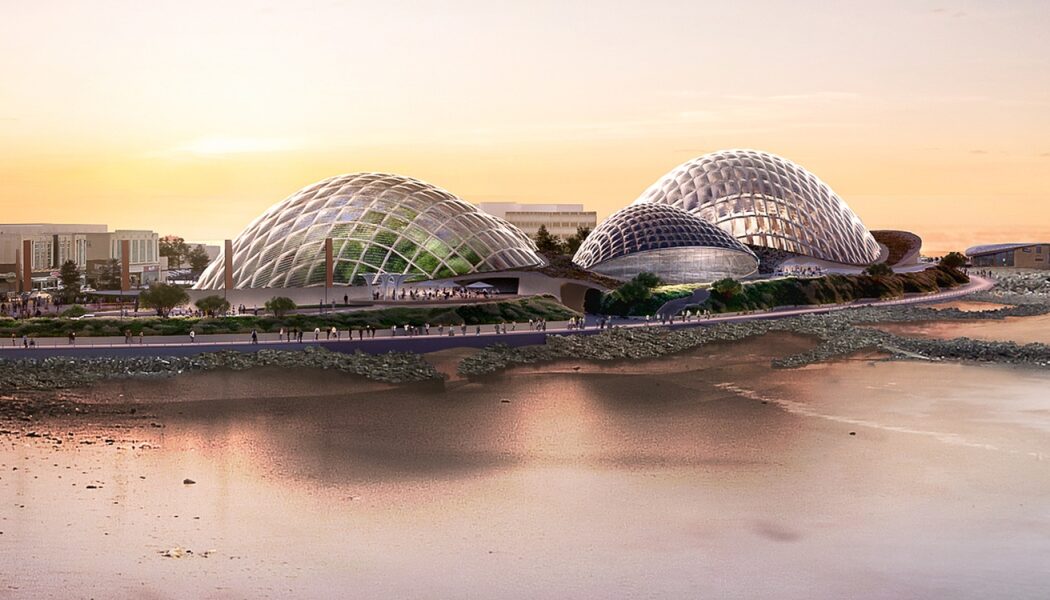 I (Storm Cunningham) have been traveling the world in search of inspiring socioeconomic revitalization and environmental restoration stories since I started researching my first book, The Restoration Economy, back in 1996. 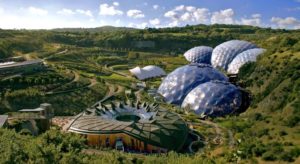 One of my absolute favorite success stories, the Eden Project, combined both socioeconomic revitalization and ecological restoration.

I only wish I had allocated more than one day to visiting this magnificent facility.

The original Eden project turned a played-out china clay mine in Cornwall, England into a spectacular botanical showcase. In the process, it helped revitalize the poorest county in England, becoming its largest private employer.

I’ve been featuring the Eden Project Cornwall story in many of the talks and workshops I’ve done over the past couple of decades. 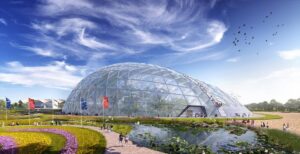 If you’re a long-time reader of REVITALIZATION, you probably know already about Eden Project Qingdao.

This was Eden Project International’s first replication of this successful model. We’ve reported on their progress twice: here and here.

That Chinese project helped revitalize and ecologically restore a coastal area that had been devastated by badly-planned (and unplanned) shrimp farms. 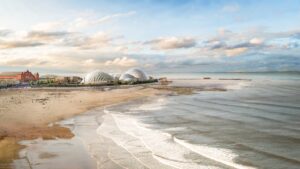 Beyond its design the project will have far-reaching economic and social impact, directly employing more than 400 people, with an additional 1500 jobs supported in the region, and will inject £200 million per year into the North West economy.

It will take inspiration from its location within the landscape of Morecambe Bay, a natural estuary south of the famed Lake District. 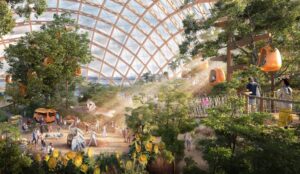 For many years Morecambe has been one of Britain’s most popular tourist destinations with visitors attracted to its stunning natural landscape.

Eden Project North re-imagines Morecambe as a seaside resort for the 21st Century, inspiring wonder and a connection with the natural world drawing on the Eden Project’s focus on education, ecology and community.

The project is designed to create new views across the bay, while complementing its townscape including the setting of the historic Winter Gardens and Midland Hotel nearby.

At the heart of the attraction, organized around a central courtyard, is a series of shell-like structures which will host the main exhibition spaces: immersive experiences that will inspire wonder in the natural life above and below the bay.

These spaces are known as the Rhythm Machine, the Bay Glade, the Bay Hall and the Natural Observatory.

Wrapped around the lower part of the shells are the ancillary spaces, designed to seamlessly integrate the shells into the surrounding landscape.

These undulating forms, accommodating different uses, resemble a dune-scape emulating the natural forms of the bay.

“Planning permission is a huge milestone on our journey towards making Eden Project North an exemplar project for Morecambe, Lancashire and the North of England. The project is now definitively shovel-ready and a compelling financial case has been made to the government. We are primed and ready to create this beacon to a green and sustainable future, be part of Levelling Up and drive economic and social enhancements across the region,” said David Harland, Chief Executive of Eden Project International.

“While we are incredibly proud of what we and our partners have achieved so far, we now need UK government support to quickly bring this to fruition and maintain momentum. We’re hugely grateful to the Lancaster City Council for granting this landmark project planning permission. Massive thanks must also go to our partners and the community in the region for supporting us throughout the consultation process. We continue to be inspired by the wellspring of positivity we get from the people of Morecambe,” he added.

Surrounding the buildings will be a collection of beautiful outdoor gardens, designed to reflect the flora, geology and rhythms of their unique coastal environment.

These include the Rhythm Garden, incorporating a new outdoor arena, and the Tide Garden whose beds spiral down towards a tidal pool at the garden’s centre.

The concept for Eden Project North is also driven a regenerative and biophilic design approach, building on Grimshaw’s work at the first Eden Project destination in Cornwall.

The design focuses on reducing embodied and operational carbon, minimizing energy demand and contributing positively to the environment: the project will be a showcase for visitors to learn about and experience this approach.

The site will also be home to Eden Project’s research and education program encouraging curiosity, connection and understanding of our natural world.

“Inspired by the unique location and outstanding natural beauty of Morecambe Bay, Eden Project North will become a landmark destination of national and international significance. We are delighted that the scheme has now secured planning approval and look forward to bringing to life, for Morecambe, a place that will bring wonder, wellbeing, and connection to the natural world,” says Jolyon Brewis, a Partner at Grimshaw.

“Thank you to everyone in the community and local partners who have contributed to and supported this project so far,” he concluded.

Eden Project North will be a major new attraction in Morecambe, Lancashire. It will be a destination that combines indoor and outdoor experiences, connecting people with the internationally-significant natural environment of Morecambe Bay while also enhancing wellbeing.

The project has far-reaching environmental, social and economic ambitions, but above all it will be a day out that inspires a sense of wonder and connection with the natural world.

Eden Project North will be a ticketed visitor attraction that is sustainable and transformative, with large indoor environments, housed within iconic pavilions, at its heart. It will build on the Eden Project in Cornwall’s particular mix of entertainment and education, leaving visitors with lasting memories as well as driving positive behavioral change.

Subject to funding being secured, it is due to open in 2024.