Back in April of 2017, Airbnb opened the doors of the Yoshino Cedar House, a first-of-its-kind project that explores how sharing, architecture and culture can help revitalize rural communities.

The home began as a collaboration between Airbnb co-founder Joe Gebbia, Japanese architect Go Hasegawa, and Yoshino, a small town nestled in the mountains of Nara. By bringing together modern technology, community-centric design, and culturally significant craftsmanship we looked to create a deeper relationship between travelers and the communities they visit. 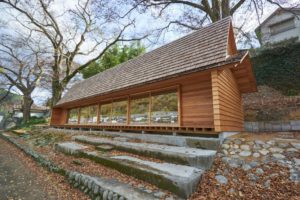 In 2016, the home was built in Yoshino, using wood from a sustainably-managed nearby cedar forest. It was unveiled at the House Vision exhibition in Tokyo.

Afterwards, the two-story home returned to the banks of the Yoshino River and—after gaining business and cafe licenses—it opened on Airbnb in April of 2017, with the first official booking occurring on April 7.

Now, one year later, the revitalizing experiement seems to be a success. Over the first twelve months, there were 346 guests from around the world. Visitors included Spanish Pritzker Prize winning architects RCR, Australian Olympic swimmers, and a number of local musicians and artists. The home was open from Wednesday to Sunday, as the hosts piloted different ways of welcoming guests, with a 70 percent occupancy rate during these open nights.

In the first full year the Yoshino Cedar House homestay earned $24,990 which was split amongst the cooperative, with a large portion reinvested into the community. The cafe in the house made an additional $2,814 through breakfasts and lunch for guests and locals. Collectively, during the same time period, the total earned by hosts in the district was over $50,000. Beyond the home, 70 jobs were supported as a result of the project.

“With Yoshino Cedar House, we challenged ourselves to explore the future of living and the home as a shared space. Our preliminary focus was on models that we could create now that could be applied to communities and countries around the world in the future. To see the growth in Yoshino in just a year is inspiring not only to our team, but to villages around the world facing similar issues of aging populations and urban migration,” says Gebbia.

The impact of the house has inspired others to try home-sharing. Prior to the inception of the Yoshino Cedar House in September 2015, there were just four homes being shared on Airbnb in the district, as of 2018 there are 15 listings in Yoshino.

Beyond guests who stayed at the home, 670 day visitors came to the banks of the Yoshino River to see the Cedar House. This increase in tourism was well received by town officials and extensive media coverage has helped shine a light on some of the artisans and craftspeople of the town. As a result, home-sharing in the off season has increased dramatically as others discovered the benefits of opening their homes to strangers.

The Yoshino Cedar House has become a center for guests to try local experiences around town. These in-person interactions build community, foster cultural exchange, and strengthen empathy and understanding. In a more tangible way it creates new opportunities for communities to conserve and protect their heritage and culture, while sharing it with others. 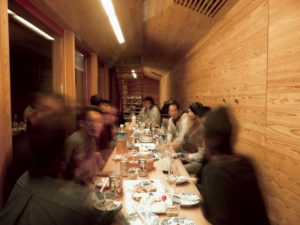 Both the house and the community have proved to be resilient, as well. In October 2017 Yoshino was hit by a typhoon, one of the largest on record. Over two days the river rose 18 feet above usual levels. Water began seeping into the ground floor and filled the space underneath the communal dining table.

Within hours, the host cooperative, town officials and community members descended on the Yoshino Cedar House and started to clean and repair the damage. Thanks to the response of the community, there was very little damage to the property and no damage to any electrical or plumbing. Within days the listings reopened and hosting began again.

On the first night after reopening the hosts held a community party and everyone who helped to clean up came out to celebrate.

In the first year of hosting, the house has offered visitors a glimpse into the real life of Yoshino and offered a model for developing new economies within culturally rich communities in Japan and beyond. The Yoshino Cedar House is more than a physical space. It speaks a simple truth that we all understand: human beings seek community.

Since opening there have been a number of villages across Japan, and the world, that have looked to adapt this model of community driven hospitality. As a result, we are sharing best practices for working with rural communities and expanding our investments in rural revitalization. Over the next year we will look to roll this model out to similar areas around the world to boost localized tourism and reinvigorate economies.

Yoshino Cedar House is not only part of the community, but is part of our life now,” says Teruichi Ishibashi, Timber Merchant, Carpenter and Airbnb Host.

All photos courtesy of Airbnb.