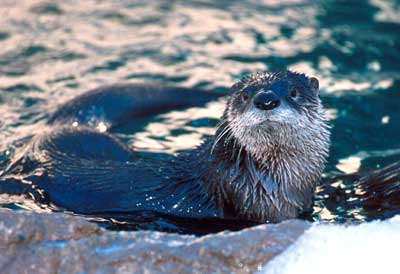 This 2009 article and 2008 press releaase describe the reintroduction of river otters (5 in 2008, 6 in 2009) to New Mexico after having been exterminated half a century earlier.

The sun had barely peaked over the Taos Mountains. A half-dozen river otters from the Pacific Northwest seemed at home after being released into the ice cold water of the Rio Pueblo de Taos, New Mexico.

A native New Mexican once found in streams and rivers throughout the state has returned home after a 60-year absence. Five river otters were released today in the waters of the Rio Pueblo De Taos.

The wild otters were trapped and transported from Washington by USDA Wildlife Services and Taos Pueblo as part of a larger otter reintroduction program organized by Taos Pueblo, The New Mexico Department of Game and Fish, the U.S. Bureau of Land Management, and the New Mexico Friends of River Otters, a coalition of citizens, agencies and conservation organizations dedicated to restoring otters to the state.

The wild otters were trapped in Washington state and transported to New Mexico as part of an effort to return the sleek mammals to their historic range in the state. The otters were inspected by state game officials before being released from large wooden crates along the river’s bank.

Several groups, including the Bureau of Land Management and state Game and Fish Department, have been working years to get the otters back into New Mexico rivers. They were once plentiful in the upper and middle Rio Grande, the Gila, Mora, San Juan and Canadian river systems.

Decades of trapping and habitat loss are believed to factors that led to their disappearance from New Mexico.

“They were extirpated in 1953 so in an ethical sense, they are rightful residents. They belong here,” said Rupert Chambers, a board member with Amigos Bravos, one of the groups that has supported the reintroduction.