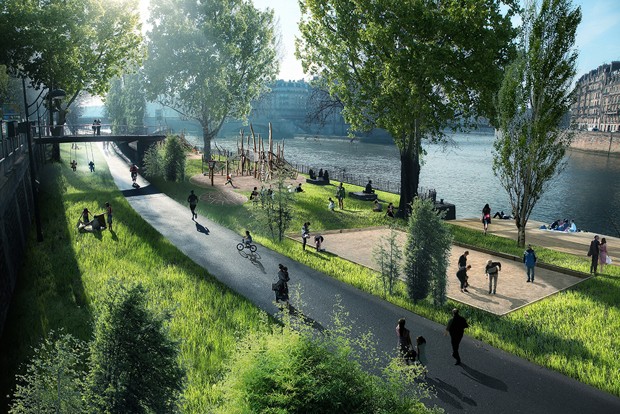 Paris seems to be getting less and less motorist-friendly by the day. Following a set of promises to slash diesel usage, extend lower speed limits and bar polluting cars from the city core, Mayor Anne Hidalgo this week announced a plan to thoroughly reclaim the quayside on the right bank of the River Seine for pedestrians.

With cars already banished from a long strip of the Left Bank, the Seine in central Paris will as of summer 2016 be entirely encased within two lush, motor-free parkland buffers. Sounding more French than ever, Hidalgo described the plan as “an urban, almost philosophical project, which consists of seeing the city in another way than through the use of cars.”

This is about far more than making things tough for drivers, however. The space freed up from redirecting cars will be broad enough to create a wide promenade, shaded by trees and with space for children’s playgrounds and sports facilities. Covering up to 3.3 km kilometers in total*, this green border will create up to 1.4 acres of new parkland while simultaneously reducing pollution.

Judging by the renderings available, it’s going to look and feel delightful. The plan will also correct one of the worst planning mistakes Paris made in the 20th century (more of which later) and, perhaps best of all, probably cost no more than €8 million ($9 million).