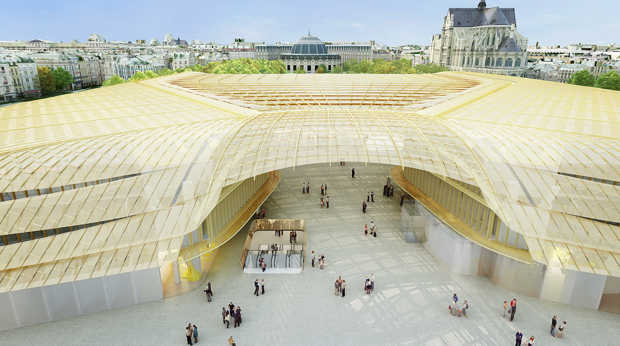 Paris’ greatest new monument is a roof. Not just any old roof mind you—this spectacular new structure will undulate across 2.5 acres of the city, with 16,000 scale-like glass panels suspended from 15 steel ribs that Paris City Hall itself describes as “giant Meccano”.

Already referred to simply as “the Canopy,” the roof is currently being bolted together on site in the Les Halles neighborhood. Due for public opening next year as part of a new cultural and shopping complex, the Canopy will do more than give shoppers something new to gawk at and shelter under. It could help correct what some see as the worst planning decision Paris ever made.

That’s because the Canopy, designed by architects Patrick Berger and Jacques Anziutti, stands on some of the most contested ground in the city.

Until the 1960s, the site was home to a huge Victorian wholesale market. Demolishing the beautiful steel and glass pavilions of the old market was a huge cultural loss.

The new revamp could (literally) put a lid on this mistake, and hopefully restore the area’s prestige among inner Parisians.