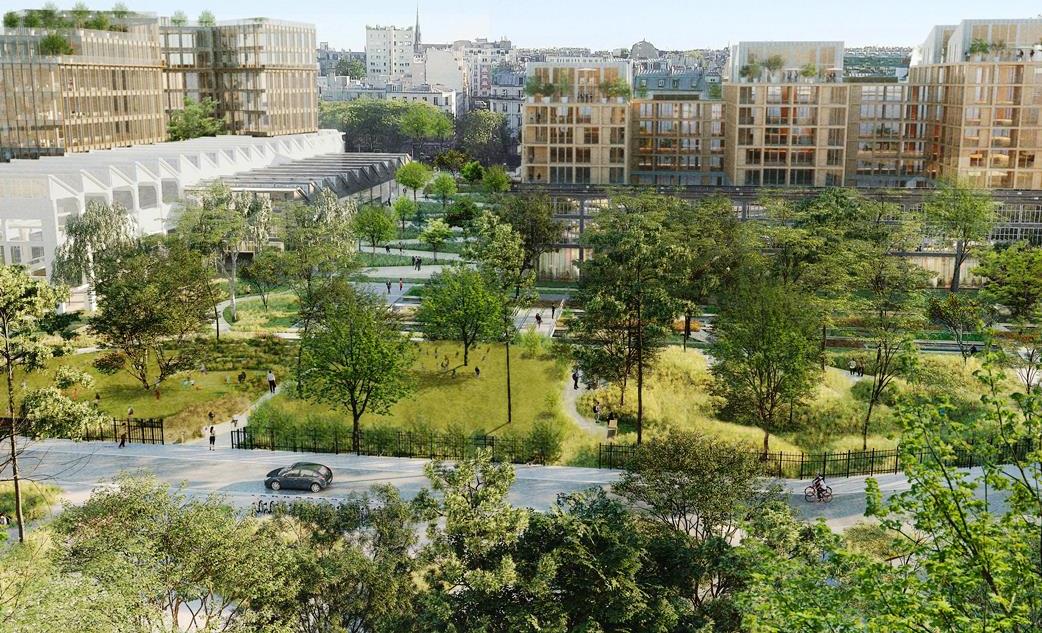 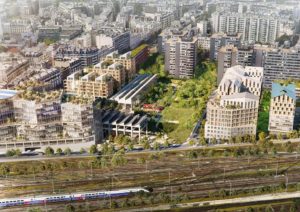 The site will be reconnected to surrounding neighborhoods in a way that revitalizes social cohesion, and features on-site renewable energy production.

The new neighborhood will include 1000 new residents, big public parks, offices, theater, public school, industrial design incubators, a graduate school of design, food courts and urban farming – all in the heart of Paris. 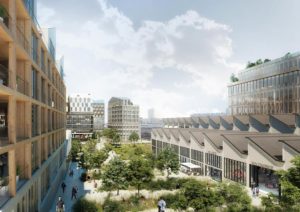 The team’s winning project for Ordener-Poissonniers “Jardin Mécano” (Mechanical Garden) creates a new urban ecosystem by preserving the site’s remarkable industrial heritage while adding an abundance of green, nature-based public spaces and carbon neutral architecture, creating a socially sustainable urban development for the heart of the 18th arrondissement of Paris.

The new neighborhood will include a mix of social and private housing for 1000 new residents and 36,500 square meters of industrial design, arts, food and tech.

A generous green gift for Paris 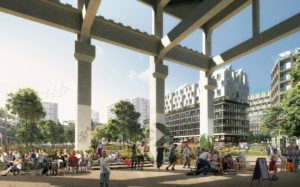 The heart of the neighborhood will be a series of connected green public spaces with outdoor restaurants, amphitheaters, band stands, and a large public garden of more than one hectare of natural amenities. The public spaces reinterpret the traditional Paris cityscape and strengthen the values and the qualities of the original railway site.

As such, they reuse its central spaces, materials, topology and elements such as railway tracks, a trolley ferry trench, railway signals and other industrial remains to create a distinct and unique urban quality specific to the Ordener-Poissonniers site.

“The Ordener-Poissonniers project will act as a green generous gift to the city of Paris. In the transformation of the old post-industrial railway site we have especially focused on the values and qualities we want the new development to give back to the rest of the city. By combining the strong industrial character with innovative nature-based designs and public ecosystem services we create a new standard for nature in Paris – where nature is everywhere and where humans, plants and animals can live and flourish together,” says Rasmus Astrup, a partner at SLA.

The green public spaces are designed to offer a free, common good for residents, workers and visitors alike. Placed in the densely populated 18th arrondissement, the public spaces will act as a green lung for the neighborhood and provide ecosystem services such as cleaning of air pollution, natural urban cooling, cloudburst management, strengthened biodiversity, stronger social integration and diversity. The public spaces will optimize the local microclimate all year round, making the neighborhood a better and healthier place to live and work.

“All is designed to make biodiversity, natural amenities, sustainability and post-industrial heritage the starting point of the entire development of Ordener-Poissonniers – a radical way of literally growing a new neighborhood out of the existing Parisian soil,” says Astrup. 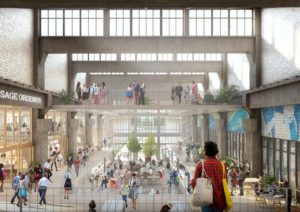 The form of the new Ordener-Poissonniers will be optimized with regards to sun/wind to reconcile energy sobriety and quality of life for the future users. The spatial organization of the buildings favors the recovery of free solar inputs and natural ventilation while preserving views to the large landscape for all residents. The result is a state-of-the-art sustainable architecture and neighborhood.

“With the new Ordener-Poissonniers we create a new form of urban ecosystem that will be entirely carbon neutral and extremely energy efficient through its bioclimatic masterplan. All roofs will consist of innovative solar tiles, de facto turning the whole neighborhood into one big solar power plant. Free heat from the local datacenter is extracted and used in the buildings. All in all, the project will have an exemplary environmental footprint above 94 percent – with heating costs for the area amongst the cheapest in Paris,” says Christian Biecher, founder of Biecher Architectes.

The competition win of Ordener-Poissonniers marks the third Parisian project for Danish landscape architects SLA, of which the innovative nature-based Reinventer Paris Ternes project especially has gained widespread acclaim. The three projects are the result of SLA’s involvement through many years in the French capital.