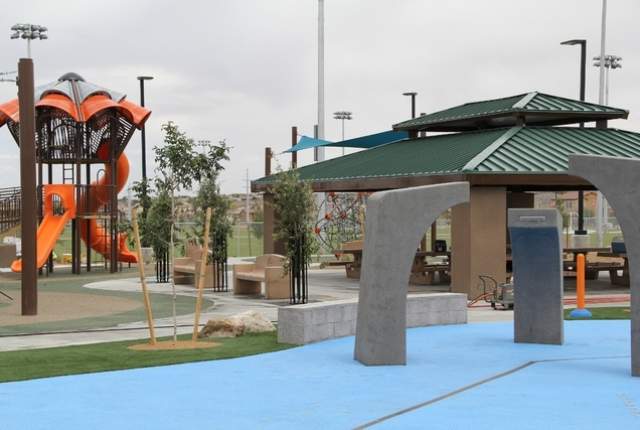 The city of Henderson, Nevada continues fueling its pride in parks as it adds No. 62 to the list. The 21-acre park is slated to include lighted multi-use and soccer fields; basketball, tennis and volleyball courts; a playground; a dog park; a splash pad; and a picnic area.

Aventura Park is part of a turnkey public-private partnership (P3) program in which a developer builds a neighborhood park in accordance with city standards and dedicates the completed park to the city for public use.

“It feels like a community park, but it’s also managed by the local municipality, which is a unique recipe,” said contractor Guy Martin of Martin Harris Construction. “When a municipality builds a park, it typically feels institutional. Aventura is more community-based, and it’ll be the cornerstone of what’s to come in Inspirada.”

“A community used to rely on three elements: a fire station, police station and library. Now, parks and open spaces are replacing libraries,” Martin said. “You don’t have to be a big scholar to notice that our community is severely missing outdoor time, physical activity and family interaction. But if you go to a park, you’ll find those elements.”