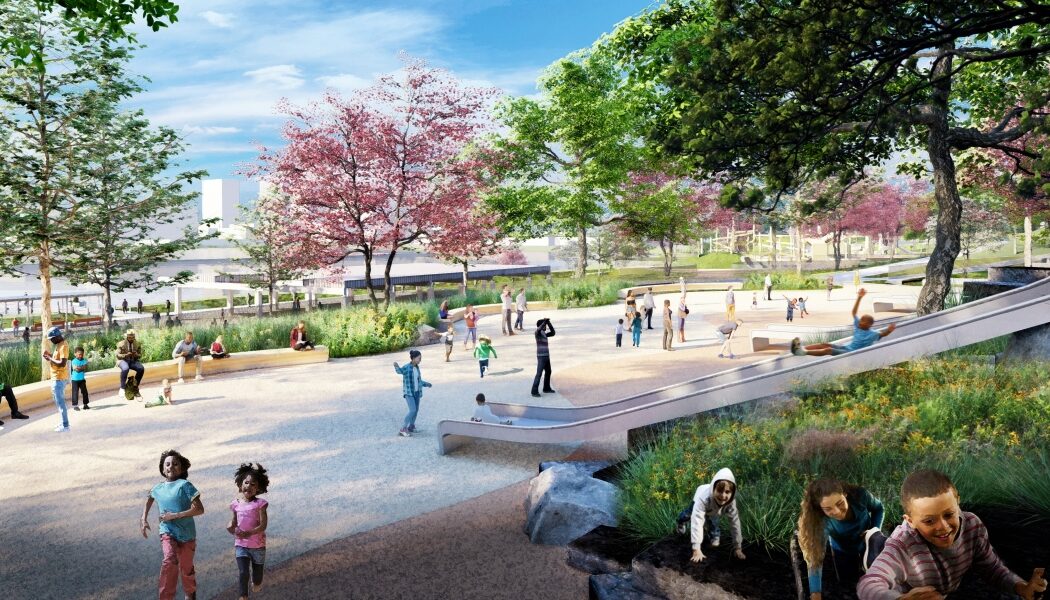 On February 24, 2022, a restorative new vision for the revitalized future of Baltimore, Maryland’s Middle Branch of the Patapsco River was unveiled at a virtual public meeting. 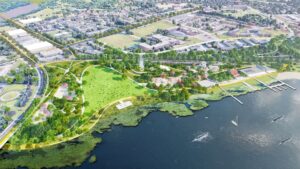 With the goals of equitable economic revitalization, environmental justice and improved ecological resilience and public health, Reimagine Middle Branch represents a commitment to deliver parks, projects and programs that unite the 19 neighborhoods of South Baltimore by connecting them to one another and to the waterfront.

The plan’s recommendations fit within a framework of three guiding principles: Protect and Connect the Shoreline; Transform Barriers into Connections; and Strengthen Communities with Parks and Programs. 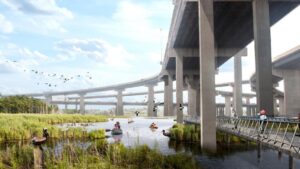 “Our work to ‘reimagine Middle Branch’ is a key component of our larger strategies to revamp and reinvigorate recreation opportunities and outdoor spaces throughout our city,” says Mayor Brandon M. Scott.

“This is about providing clean, accessible, and modern spaces that show our residents, particularly our young people, that they matter. That we care about them and are going to do everything in our power to give them the best quality-of-life possible,” he continued.

The Reimagine Middle Branch plan builds on earlier community planning efforts and capital investments, like the Middle Branch Fitness and Wellness Center nearing completion in Reedbird Park. And yet, the planning concepts have evolved through extensive neighborhood-based engagement and outreach to stakeholders. 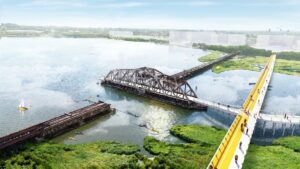 The plan leverages existing strengths and assets, such as local businesses and neighborhood parks, and identifies new opportunities for investment inspired by the community’s input.

This has resulted in a unique focus on integrated economic development and a concentration on investments in South Baltimore’s traditionally underfunded Black and Brown communities.

“Alongside new public space amenities, we are equally focused on local workforce development and business incubation opportunities, such as green jobs involved in maintaining and monitoring the restored wetlands, and pop-up markets for local vendors,” he added.

Funding for this work comes from a mix of sources: Casino local impact grant funds, managed by the City of Baltimore and by South Baltimore Gateway Partnership, are paying for the plan, as is a Maryland state capital grant.

Casino impact grants also contribute to the $25 million total construction cost of the Fitness and Wellness Center and adjacent sports field complex. A mix of federal, state, and local grants have been secured for wetland construction and trail projects.

During the public meeting, on February 24th, the team led a virtual walk-through highlighting proposed initiatives and improvements for the shoreline and for neighborhoods surrounding the Middle Branch, from Brooklyn and Curtis Bay, to Cherry Hill and Westport, to Pigtown and Carroll Park, Sharp-Leadenhall, and Port Covington. 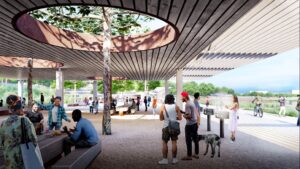 In Cherry Hill, the plan centers on an expanded Middle Branch Park that links Middle Branch Fitness and Wellness Center in Reedbird Park with the shoreline around Medstar Harbor Hospital and reaches Smith Cove near the intersection of Waterview Avenue and Kloman Street, where it connects to a proposed waterfront development at Westport.

In the heart of the Middle Branch Park, a range of improvements are envisioned, including a new boathouse, improved boating and fishing piers, and an expanded playground.

The existing boathouse is proposed to be adapted for social space and a food hall or marketplace. An outdoor covered pavilion serves to house large gatherings, like family reunions.

“Complete streets” treatments for Waterview Avenue, including a new intersection at Seamon Avenue, will enhance pedestrian safety and access between Cherry Hill and Middle Branch Park.

Work is underway to create an improved waterfront trail with separated bike and pedestrian lanes that will connect these areas. From the trail, boardwalks and overlooks would provide access to marshes and other features of a new “living shoreline.”

The Middle Branch Marina is proposed to be reconfigured and opened to a mix of public and private uses, maintaining the live-aboard community there today while adding educational and recreational programming. West of the marina in Smith Cove, the design features restored marshes and Chesapeake maritime forests, fishing piers, pavilions, and a nature-based playground.

Taken together these improvements comprise a significant, regional-scale park connected to neighborhoods south and west of the Middle Branch. 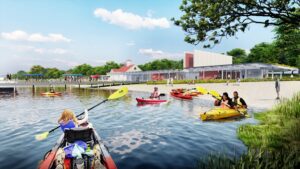 The Middle Branch’s public open space network will front new, proposed developments in Westport and Port Covington and extend north to Ridgely’s Cove, where large expanses of marsh will form a “maritime park” that also functions as green-stormwater infrastructure and creates a new natural area at the mouth of the Gwynns Falls.

The proposed trail network in Ridgley’s Cove includes boardwalks and a new east-west pedestrian bridge that connects Westport with Port Covington, and links three parks: Black Sox Park to the west, Swann Park to the east and a new “Underpass Park” at Stockholm and Sharp Streets.

Named for the Negro League Baseball team that used to play there, Black Sox Park offers the opportunity for a range of activation, from a youth baseball field to a set of trails winding through woodlands and wetlands. An African American Heritage Trail connects the park to other historically and culturally significant sites.

Across Ridgely’s Cove, Swann Park is reoriented to the water, with a beach, canoe and kayak launch and boat rentals. Underpass Park would provide communities to the north of the Middle Branch a new waterfront open space that includes a skate park, sports courts, and boat launch.

A restored shoreline and improved trail will connect Middle Branch Park to the new Cherry Hill Fitness and Wellness Center in front of Harbor Hospital. 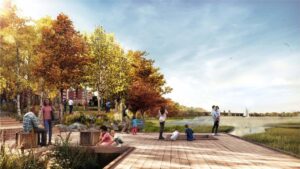 The Loop Trail will connect all these parks and open spaces with bike and walking trails, creating an 11-mile circuit around the Middle Branch that connects to regional trails, including Gwynns Falls Trail to the northwest and the BWI and East Coast Greenway trails to the south.

In addition to providing connections and recreational opportunities, segments of trail network will tell a story about South Baltimore’s culture and history, linking significant places and offering new cultural programming.

These frameworks and priority projects come from input received early-on from community leaders, which has been continuously reinforced and refined through further input from multiple resident and stakeholder groups in the communities surrounding the Middle Branch, as well as experts in various scientific fields.

This shared vision for South Baltimore builds on work completed, funded, and underway, and is catalyzing near term improvements slated for development in the next 5 years. Ultimately, Reimagine Middle Branch aims to build a network of places and spaces that support health, vitality, and future investments across South Baltimore.

All images are courtesy of Credit James Corner Field Operations.