Much of the world first learned of regenerative agriculture (then called restorative agriculture) in REVITALIZATION publisher Storm Cunningham‘s 2002 book, The Restoration Economy, which devoted an entire chapter to it.

But Rodale Institute had been pioneering regenerative organic agriculture since their founder, J.I. Rodale, wrote Healthy Soil = Healthy Food=Healthy People on a chalkboard back in 1942.

His son, Robert Rodale, coined the term “regenerative organic agriculture” to distinguish a kind of farming that goes beyond simply “sustainable.” That means agriculture that improves the resources it uses, rather than simply not destroying or depleting them. Rodale considers it a holistic systems approach to farming that encourages continual innovation for environmental, social, economic and even spiritual well-being. 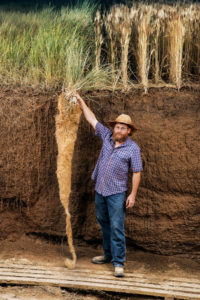 Now, on September 13, 2017, Rodale announce the new Regenerative Organic Certification, a cooperative effort among a coalition of farmers, ranchers, nonprofits, scientists, and brands like Patagonia.

The effort was led by Rodale Institute, and has established a new, high-bar standard for regenerative organic agriculture. Owned by this coalition, NSF International is facilitating the public comments process and is open to many certification partners. The standard encompasses guidelines for soil health and land management, animal welfare, and farmer and worker fairness.

Regenerative Organic Certification builds upon the near 100-year legacy of organic movement visionaries like J.I. Rodale and Dr. Rudolf Steiner, and provides stepwise guidance for farming and ranching operations, transportation, slaughter, and processing facilities that produce food, cosmetics, and fiber. 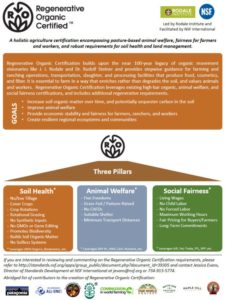 Regenerative Organic Certification does not aim to supplant current organic standards. Instead, this certification aims to support these standards while at the same time facilitate widespread adoption of holistic, regenerative practices throughout agriculture. It builds upon the standards set forth by USDA Organic and similar programs internationally, particularly in the areas of animal welfare and farmer and worker fairness.

The need is clear: Conventional agriculture is harming the planet, exposing people to toxic chemicals, and causing unnecessary suffering to animals that support the system. Just as alarming is the fact that the earth’s topsoil is degrading and eroding at an alarming rate: Scientists predict that current industrial farming practices and deforestation will eliminate topsoil within 60 years.

As grim as this picture looks, the promise of regenerative organic agriculture is not only a process that can rebuild critically needed topsoil, but also one that potentially sequesters carbon at the same time. In 2014, research by Rodale Institute estimated that if current crop acreage and pastureland shifted to regenerative organic practices, 100% of annual global CO2 emissions could be sequestered in the soil.

If you are interested in reviewing and commenting on the Regenerative Organic Certification requirements, please see the standards (below) and then email Jessica Evans, Director of Standards Development at NSF International.