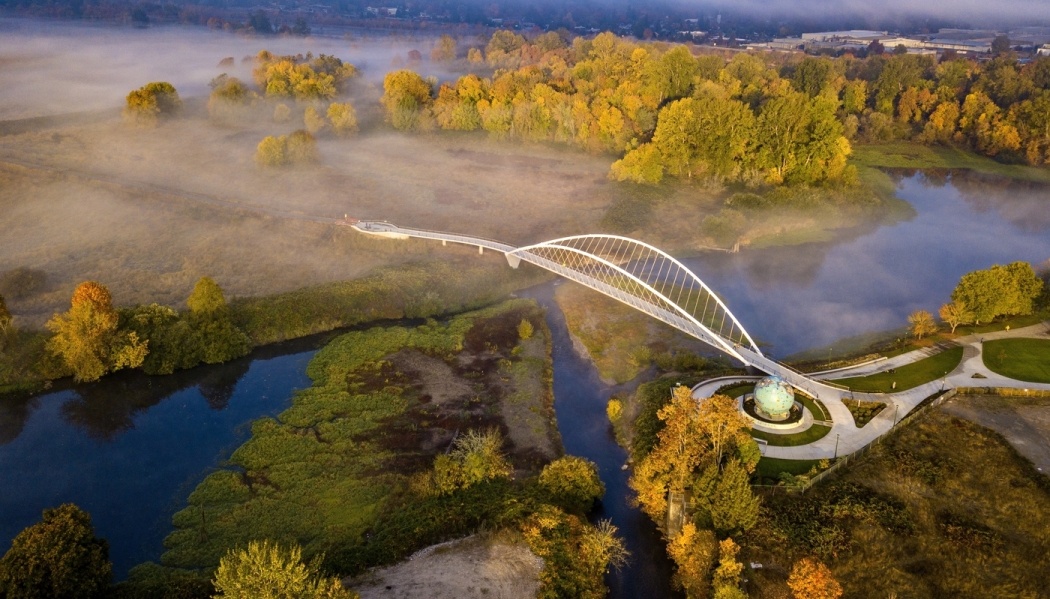 As documented in the 2020 book, RECONOMICS: The Path To Resilient Prosperity, a major part of any local or regional revitalization or resilience initiative should be reconnecting the area.

For urban areas, this often means undoing the badly-planned auto-centric infrastructure that fragments the community. 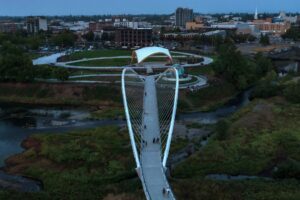 But another, less-obvious aspect of this is building new infrastructure that connects people in a healthier manner. Pedestrian and bicycle paths and trails are the most common form.

Trails are subject to the “network effect”, whereby each new mode can add value in a nonlinear manner.

For instance, adding one new segment to a trail with 20 current nodes can double the value of the entire network.

But the biggest payoff comes when the pedestrian and bicycle trails are connected to each other. This can help revitalize vast areas. 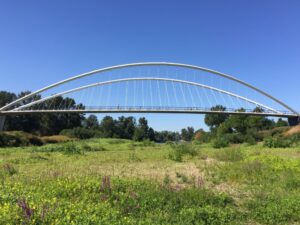 A recent (2018) example of doing this kind of connection very well is the beautiful Peter Courtney Minto Island Bicycle and Pedestrian Bridge, designed by DOWL and Jiri Strasky.

The bridge of a total length of 154.1 m is formed by a continuous girder of five unequally long spans of lengths from 10.7 to 93.9 m. The first three spans are in a plan curve with a radius of 70 m, the remaining part of the structure is straight.

The bridge deck is in a crest vertical curve. In the main span bridging the river slough, the deck is suspended on outwardly inclined arch ribs. This arch inclination not only horizontally stiffens the structure, but also opens the space, invite users to cross the river and gives the structure modern dynamic shape. 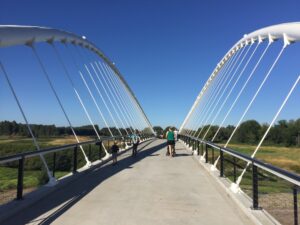 The 0.50 m deep deck is composed of prefabricated segments and a composite cast-in-place deck slab. The 5.28 m wide and 2,99 m long segments are formed by two edge beams which are mutually connected by a slab. In the joints, the segments are reinforced by floor beams.

The bridge deck is cast-in-place at the piers of the main span and in the approach spans. It has a solid trapezoidal cross-section of a variable depth from 1.02 m at piers to 0.50 m in the mid-spans, where the outer perimeter corresponds to the perimeter of the main suspended deck.

The arch ribs, which are formed by steel pipes with a diameter of 762 mm, are supported by monolithic V-shaped supports frame-connected with the deck. The hangers, which are formed by steel bars of 38 mm diameters, have a variable inclination in the longitudinal bridge direction – it starts from a point which is situated in the arch axis at a distance of 126 m above the deck. For this arrangement, the arch funicular shape is close to a hyperbola.

The steel arches were assembled of two segments suspended on temporary towers during their erection. When they were welded together they were tied by bearing cables and the precast segments were hang on them. 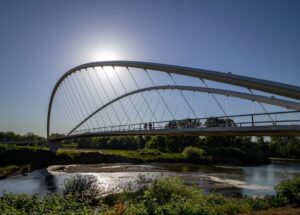 After casting the approach spans the composite deck of the main span was poured and prestressed. A simple railing, which is formed by a handrail supported by vertical posts, has rope filling. The walkway is lit by LED lights situated in the handrails.

The lighting of the arch follows its curve and thus emphasizes its natural function – to overcome an obstacle. The lights are oriented downwards and therefore do not create light smog.

The steel arch and suspenders are painted white, the railings’ handrails and posts are black. At the connections to the existing walkways, landscaping corresponding to the nature of the parks’ landscape was performed. 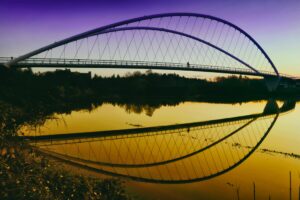 The bridge forms an integral structural system in which the main load bearing members – the arch ribs and the deck are frame connected with piers. The deck from high strength concrete has a robust cross section that can be easily inspected and maintained.

The transverse stability of the arch ribs is given by the deck suspended on the inclined hangers. Therefore, no arch bracing or transverse beams supporting the deck are required.

The pedestrian bridge respects the scale of the landscape and adjacent parks. The structure is light and transparent; it consists of elements that have human scale.

The bridge is comfortable for the users, and its movement caused by the movement of pedestrians or wind does not cause unpleasant feelings to users.