The Franklin Delano Roosevelt Park (FDR Park) is Philadelphia, Pennsylvania’s iconic 348-acre park carved out of the tidal marshes in South Philadelphia. Designed by the Olmsted brothers in 1914, FDR Park’s sequence of picturesque lakes with adjacent lawns are connected by a network of carriage and foot paths.

In 1926, the park hosted the national Sesquicentennial Exhibition and several grand civic buildings, including the iconic Boathouse, opened for the first time.

FDR Park hosts a playground, 4 baseball diamonds, a renowned skate park, a network of lakes, the Swedish American Museum, and 126 acres of woodland.

In 2019, after engaging with nearly 3,000 community members and stakeholders, Philadelphia Parks & Recreation and the Fairmount Park Conservancy published a master plan to reimagine a historic Olmsted Park to serve 21st century Philadelphians.

The plan, designed by WRT, creates an ecologically sustainable vision for FDR Park that inspires investment, meets the needs of all users today and tomorrow, and focuses on resiliency in the face of a changing climate. 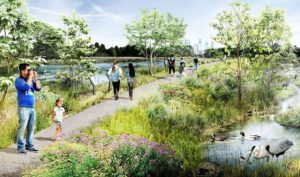 The City of Philadelphia in partnership with the Pennsylvania Department of Conservation and Natural Resources (DCNR), the Commonwealth’s Redevelopment Assistance Capital Program (RACP), and the Fairmount Park Conservancy are committing new funds to create a Welcome Center at FDR Park, and design a world-class destination playscape in South Philadelphia.

“After a year when park visitation has soared, the need to invest in FDR Park has never been more clear,” said Kenney. “As a child growing up, I spent summers all my summers here at The Lakes. The commitments being made to FDR Park today will deliver a 21st century park for future generations of Philadelphians to enjoy.”

The first phase of the master plan will enhance the visitor experience by restoring and transforming the 5,500 square foot guardhouse at FDR Park’s Broad Street and Pattison Avenue entrance into a Welcome Center. The shared space will be used by Philadelphia Parks and Recreation staff and community organizations to engage park visitors and deliver a rotating calendar of programs.

The Welcome Center will include:

“We know from speaking with over 3,000 residents in seven languages that when families visit FDR, they want to stay longer and do more,” said Kathryn Ott Lovell, Commissioner, Philadelphia Parks & Recreation. “The Welcome Center will provide the basic amenities that allow visitors to extend their stay, and so much more with dining, event and education space, and community workspaces.”

The Welcome Center project is being funded through $3 million in State of Pennsylvania Redevelopment Assistance Capital Program grant funds and $1 million from the City of Philadelphia’s capital budget.

The funding announced today will also go toward the design of a signature playground and picnic area celebrating FDR Park’s unique identity. The Children’s Play Area, located in a grove of mature trees will include high quality, interactive play elements set within a landscape of natural features including barrier-free paths, hills and planted spaces and will be next to the park’s Welcome Center.

“Throughout the master planning process, we learned that park-goers wanted more nature and more play at the Lakes. The Pattison Playground will bring both to South Philadelphia, thanks to the generous support of the DCNR grant,” says Maura McCarthy, Ph.D., Executive Director of Fairmount Park Conservancy. “Fairmount Park Conservancy has been committed to the future of FDR Park since day one, and we can’t wait for families to enjoy this one-of-a-kind playscape.”

Design of the Children’s Play Area will be funded by a $250,000 grant from the Pennsylvania Department of Conservation and Natural Resources, which is matched by a $250,000 contribution from the Fairmount Park Conservancy.

“Families in South Philadelphia know and rely upon the fresh air and green space at FDR Park,” said Philadelphia City Councilmember Kenyatta Johnson (Second District), whose Council District includes FDR Park. “From family gatherings, to celebrations in the Boathouse or marathon training along the loop road, FDR has something for everyone. Thanks to the new funding announced today, FDR will be on the path to providing visitors 21st century park amenities in a majestic natural setting.”

The new projects build upon 18 months of work to address early recommendations from the FDR Park Master Plan, which included:

Fairmount Park Conservancy exists to champion Philadelphia’s parks. We lead capital projects and historic preservation efforts, foster neighborhood park stewardship, attract and leverage investments, and develop innovative programs throughout the 10,200 acres that include Fairmount Park and more than 100 neighborhood parks around the city.

Learn more about the renovation project.