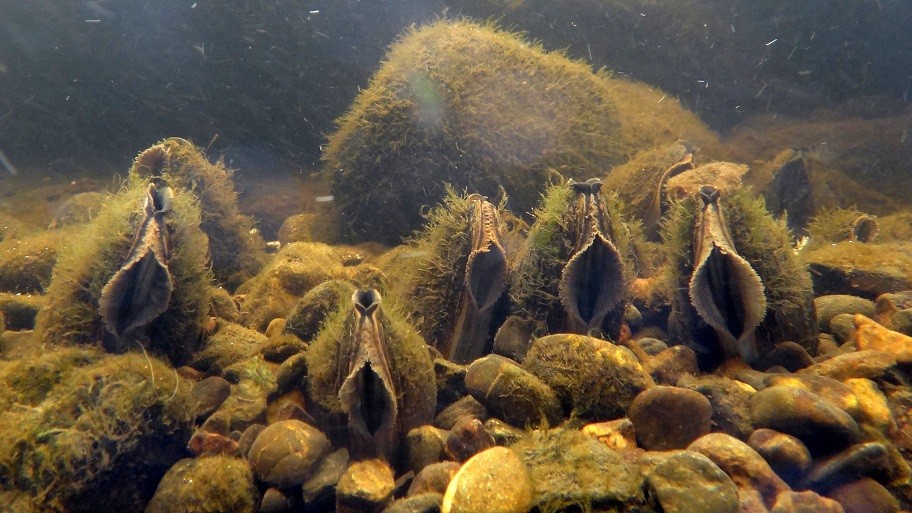 Back on February 16, 2017, Philadelphia unveiled the world’s first city-owned hatchery for freshwater mussels. It’s part of an exhibit at the Fairmount Water Works, which is free to visit.

The Philadelphia Water Department worked with the Partnership for the Delaware Estuary to create “The Mussel Hatchery” exhibit to show how scientists can breed freshwater mussels to restore waterways. Each adult mussel can filter up to 20 gallons of water per day for up to a century. These shellfish are one of the most endangered animal groups in North America.

“Healthy mussel beds were once abundant in most streams and rivers, helping to keep the water clean and enriching the ecology in so many ways,” said Dr. Danielle Kreeger, science director at the Partnership for the Delaware Estuary. “Our goal is to rebuild those mussel beds to put nature back to work for us, and this new exhibit will show the world that we now have the technology to do it.”

The Partnership for the Delaware Estuary has spent over a decade studying the benefits of local freshwater mussels. The organization has developed ways to restore them, and ways to rear them in hatcheries through previous efforts with Cheyney University. According to Jennifer Adkins, the nonprofit’s executive director, the new hatchery exhibit is a stepping stone in its long-term strategy.

“Our long-term vision is of a watershed teeming with shellfish, from oysters in Delaware Bay to ribbed mussels in marshes around the bay and freshwater mussels in rivers and streams,” said Adkins. “A production hatchery using the same science demonstrated by this exhibit, but at a larger scale, is the next step for adding mussel beds to the list of habitats that can be restored to make our waterways cleaner, along with wetlands and forests.”

Additional funding for the exhibit was provided by the Pew Center for Arts and Heritage, the Philadelphia Water Department, and The McLean Contributionship.

On April 19, 2017, Pennsylvania Governor Tom Wolf announced that the Partnership for the Delaware Estuary (PDE) had been approved to receive $7,934,000 from the state to eventually go beyond a mere exhibit, and construct a full-fledged freshwater mussel hatchery. The hatchery will produce hundreds of thousands of mussels annually, and they will be used to restore mussel beds in both the Susquehanna and Delaware estuaries.

In turn, these mussels will help restore water quality in both the Chesapeake Bay and the Delaware Estuary by filtering out nutrients—particularly nitrogen—that run off the land in these and into hundreds of streams in both watersheds. On May 1, 2018, Partnership for the Delaware Estuary became one of seven regional, cultural and environmental organizations to lay the groundwork for a future Aquatic Research and Restoration Center (ARRC).

Through the signing of a memorandum of understanding officially creates a coalition (the ARRC) that will focus on the development of programs with positive (restorative) conservation impact. The most notable impacts are the cultivation of freshwater mussels and shad, as part of an ecosystem restoration effort across the Delaware Estuary and its tributaries. Freshwater mussels are among the more endangered species in North America, due primarily to water pollution.

Now, on May 29, 2018, the City of Philadelphia and five organizations—Partnership for the Delaware Estuary, Drexel University’s College of Arts and Sciences, the Academy of Natural Sciences of Drexel University, Independence Seaport Museum, and Bartram’s Garden—committed to creating a large-scale mussel hatchery expected to bring millions of baby mussels back into the river. The facility will be part of the Aquatic Research and Restoration Center.

The mussel hatchery, which will be located at Bartram’s Garden, will be built with that $7.9 million from the Pennsylvania Infrastructure Investment Authority. The hatchery, which will be owned and operated by the Partnership for the Delaware Estuary, will be the world’s first that is dedicated to restoring mussel beds to promote clean water. Construction could begin in 2019.

What will make this production hatchery unique in the world, Kreeger said, is that it’s goal is not only to preserve endangered mussels, but to restore mussel beds to ultimately clean water. “The possibility that mussel restoration will materially contribute to water quality and swimmable/fishable conditions is very plausible,” Kreeger said.