Eastwick is one of the largest Philadelphia neighborhoods. It’s in the Southwest section of the city, bordering Philadelphia International Airport It was largely rural until the 1920s when swampy land was dredged to create room for that airport and other large-scale uses within the city limits.

Much of the original housing built before the 1950s lacked sewer service and other urban conveniences. Residents referred to the neighborhood as “The Meadows.” Residents enjoyed a rural lifestyle within city limits, since nearby creeks provided recreation in the form of swimming, bathing, and fishing. An extensive crabbing home industry was also based in The Meadows.

Homes ranged from traditional single-family residences with lawns and gardens to traditional Philadelphia-style row houses; sometimes, these two housing styles appeared on the same block. Brick was the predominant material used in construction.

But it’s not easily walkable. Parts of its Lindbergh Boulevard are eight lanes wide. This is mostly because neighborhood was the victim of the largest urban renewal plan in the U.S.

Note from Storm: As most folks know by now, “urban renewal” did far more physical damage to the United States than all wars combined. It was an urban planning fad (it seems to be a fad-driven discipline) that ran from the late 50s to early 70s. Urban planner in the country suddenly adopted the philosophy of “destroy it and they will come“. Well, they destroyed cities right and left, but redevelopment seldom came. To be fair, they were powerfully encouraged in this idiocy by substantial funding from Capitol Hill. The money was intended to remove blight, but the standard definition of “blight” at the time seemed to be any neighborhood–no matter how healthy–that had large number of low-income people, immigrants, or residents with darker-colored skin.(end of Storm’s note.)

Before urban renewal, Eastwick was “A beautiful, integrated community,” says Terry Williams, former president of Eastwick Friends and Neighbors Coalition. “Very vibrant. Gypsies, European Jews, Italians, Irish, Asians, African-Americans, all living in harmony. Not any racial problems. However, the government, in their wisdom, decided to end all of that through the redevelopment program of the ’50s.”

In 1950, Philadelphia officials certified the area as blighted, allowing them to embark on a demolition plan to create a “city within a city” in Eastwick. In keeping with the urban renewal practices of the time, the plan involved large-scale eminent domain. Despite widespread opposition to the condemnation scheme among Eastwick residents, officials pushed ahead. 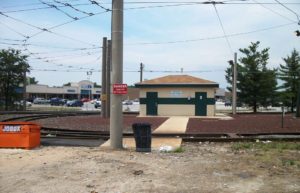 Flash forward to the present. In 2012, Philadelphia developer Korman Residential, which owned options on much of the land dating back to the urban renewal era, proposed building more than 700 apartments on the site. The area was intended for single-family housing, but a bill magically appeared in City Council to rezone 35 acres for multifamily use. Residents fought the plan, and won.

It may have seemed like a routine zoning fight at the time, but opposition to the proposal marshaled a range of interests in the neighborhood. Eastwick Friends and Neighbors Coalition formed in its wake.

A few years later, Philadelphia Redevelopment Authority officials negotiated a deal to buy back Korman’s options on 135 acres of undeveloped land for about $5 million, and promised to work with residents to create a vision for the property’s future.

That process is playing out now, and it’s requiring the city and residents to navigate the complexities of community-driven development and climate change planning, as well as grapple with how officials can make amends for the worst blunders of the urban renewal era.