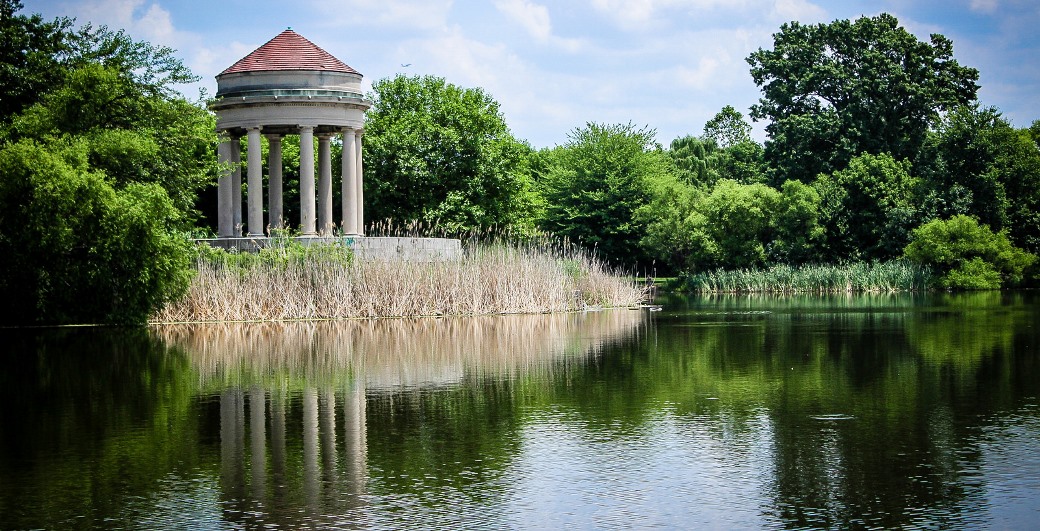 On March 19, 2018 the Fairmount Park Conservancy in Philadelphia, Pennsylvania launched a master planning process for FDR Park, the sprawling 350-acre park in South Philadelphia that is home to man-made lakes, a golf course, the American Swedish Historical Museum, and a range of recreation facilities including tennis courts, ball fields, and a skate park.

FDR is Philadelphia’s only estuary park, meaning that its waterways are tidal and exchange salt water with the ocean.

Originally designed by the Olmsted Brothers and opened in 1921, FDR’s popularity and years of heavy use have taken a toll on its infrastructure and environmental integrity. The new master plan will be developed by the design firm WRT, which expects to solicit significant community input before the plan is finalized in 9-12 months.

Philadelphia-based WRT was selected from among 15 firms that responded to Fairmount Park Conservancy’s Request for Proposals (RFP). “When you have a large city park that includes a combination of historic architecture, critically important natural lands, and popular athletic amenities, you need a team that can look at the whole picture, assess multiple priorities, and create a plan that responds to the park’s importance as both a public space and an ecological asset,” said Jamie Gauthier, Executive Director of Fairmount Park Conservancy. “Based on WRT’s previous work, we are confident that their team of planners, urban designers, architects and landscape architects can strike that balance.”

Kathryn Ott Lovell, Commissioner of Philadelphia Parks & Recreation and a lifelong Philadelphian, said it was time to restore South Philadelphia’s only large park to its original intent as an urban oasis. “The Olmsted Brothers designed parks to provide city dwellers with beautiful places to walk, picnic, relax, and play,” said Lovell. “Parks & Recreation is pleased to have Fairmount Park Conservancy’s support in dedicating time and energy to rethinking current demands on FDR Park and mapping a vision for its next century.”

Ott Lovell noted that portion of the cost of developing the plan will be funded by the parking concession that operates in the park during Eagles home games, reinvesting those revenues back into the park and the community. The rest of the cost comes from William Penn Foundation through Fairmount Park Conservancy and through an allocation from Councilman Kenyatta Johnson’s capital budget for the 2nd District.

“FDR Park is a jewel for South Philadelphia communities and a destination for residents across the city, and we want to keep it that way!” said Councilman Johnson. “This planning process is an important next step forward. I’m a strong believer and advocate for revitalizing our parks and recreation projects to improve quality of life for our city, so I’m happy to be supportive.”

WRT Principal, Keiko Tsuruta Cramer said, “FDR Park has long deserved detailed attention and careful design and programming consideration for its diverse user groups. The WRT team is thrilled to work with Fairmount Park Conservancy, Philadelphia Parks and Recreation, and the local community and stakeholders, to restore the original vision of FDR Park as an urban oasis in South Philadelphia.”

Members of Friends of FDR Park, the volunteer group that helps to maintain the park, spoke in support of the opportunity. “We’re glad to be part of the master plan process to provide a voice from supporters and users of the park,” said Todd Pride, Board President, Friends of FDR Park. “FDR is arguable one of the most diverse activity parks in the city, with a tremendous history and natural resources – and this process was designed to take all of these elements into consideration. We’re looking forward to this process and the outcome, which will elevate this great resource for the city and the region.”

In conjunction with the master planning process, Philadelphia International Airport has been investigating one of the most degraded areas of FDR Park for use as a wetland mitigation site. This mitigation would restore wetland function and habitat value to this underutilized area in the southwest corner of the Park.