Hundreds of current and future workers within Greater Philadelphia, Pennsylvania’s growing maritime industry will have access to specialized training programs under an initiative announced on December 5, 2018 by a partnership comprising Citizens Bank, the Collegiate Consortium for Workforce and Economic Development, PhilaPort and Philadelphia Works.

Established in 1994 as the Shipyard College to provide education and training to displaced workers of the closing Philadelphia Naval Base and Shipyard, the Collegiate Consortium for Workforce and Economic Development initially comprised three area community colleges (Delaware County Community College and Community College of Philadelphia in Pennsylvania and Camden County College in New Jersey) and one university to leverage the region’s expertise in various areas of training.

This collaboration of institutions of higher education serves the needs of regional employers to upgrade the skills of incumbent workers as well as to provide training to new hires. To date, over 20,000 area workers have been served.

Representatives from the four organizations gathered at the Packer Avenue Marine Terminal in South Philadelphia to announce the creation of the Citizens Bank Regional Maritime Training Center.

It’s a first-of-its-kind workforce development initiative that will provide formal, enhanced training opportunities such as forklift certification and recertification, yard jockey training and OSHA safety training. The center is being funded through a $100,000 contribution from Citizens Bank and a mix of public and private funding sources.

“Assuring that we have a well-trained, safe and inclusive workforce available for our growing Port economy is an important investment for Citizens Bank,” said Daniel K. Fitzpatrick, President of Citizens Bank, Mid-Atlantic Region. “We are honored to team up with such wonderful partners to provide the Greater Philadelphia area with its first formalized training center for Port employees.” 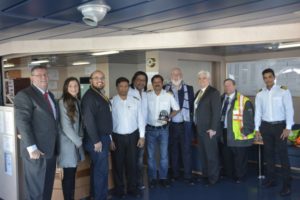 The Citizens Bank Regional Maritime Training Center will be located at a former PhilaPort-owned overflow facility at 61st Street and Essington Avenue in South Philadelphia. Initial funding will support the purchase of a portable classroom trailer, line striping on site for obstacle training, heavy equipment rentals and purchase of palletized mock cargo for applied training. Partners estimate 200 new and existing workers will take advantage of the center’s programs during the center’s first year of operations.

“I applaud Citizens Bank, the Collegiate Consortium for Workforce and Economic Development, PhilaPort and Philadelphia Works for launching this unique partnership,” said Philadelphia Mayor Jim Kenney. “This investment in the port will not only provide family-sustaining jobs for Philadelphia residents, but will help continue to position our region as a global leader in the maritime industry.”

“We’d like to thank Citizens Bank and Philadelphia Works for providing the support necessary to launch this pioneering initiative,” said Dr. L. Joy Gates Black, President of Delaware County Community College and Chair of the Collegiate Consortium. “The curriculum that we develop for the center will formalize the training process for these jobs, which until now had been handed down through generational knowledge.”

Philadelphia Works, the city’s workforce development board, will help fund and oversee training services at the center, as well as support grant writing for additional public and private funding.

“A trained workforce is a safe workforce,” said H. Patrick Clancy, President and CEO, Philadelphia Works. “Philadelphia Works’ mission is to ensure all Philadelphia residents have an opportunity to receive the training and support they need to find a career that works. This program is a great example of diverse stakeholders coming together to create a pipeline of qualified workers to fill the jobs of tomorrow, which is a pillar of the Citywide Workforce Development Strategy. We congratulate the Collegiate Consortium and thank Citizens Bank for this critical private support.”

The Philadelphia ports serve one of the most densely populated areas in the country, with approximately 27 million people located within 100 miles. PhilaPort is the independent agency charged with managing and maintaining port facilities along the Delaware River in Pennsylvania and is a critical partner in this initiative.

“A 21st century port requires a 21st century approach to training our workers,” said Jeff Theobald, Executive Director and CEO, PhilaPort. “We’ve seen tremendous growth at the port in recent years and we hope this partnership will help that growth continue, allowing us to remain competitive while keeping our workers safe.”

Of course, all the workforce development efforts in the world won’t amount to much if there are no jobs to be had, so the city and state have been working together to fund the infrastructure renewal needed to power economic growth.

It was about two years ago, on November 22, 2016, that Governor Tom Wolf announced a comprehensive Capital Investment Program at the Port of Philadelphia that will result in more than $300 million in investment in the Port’s infrastructure, warehousing, and equipment. This initiative, which will start next year and continue through 2020, will double container capacity, position the Port for future growth, create thousands of jobs, improve efficiency, and increase tax revenues.

“This capital investment program will give the Port of Philadelphia the tools it needs to improve its competitive position and create thousands of family-sustaining, middle class jobs while increasing state revenues,” said Governor Wolf. “With its major economic impacts throughout the state, my administration understands the value of Pennsylvania’s port asset in Philadelphia.”

The program, ranking among the largest investments by a state on the East Coast, will boost three of the busiest sectors of the Port of Philadelphia, including the Packer Avenue Marine Terminal, the Port’s automobile-handling operation, and the Tioga Marine Terminal.

“I thank Governor Wolf for this significant investment, and I look forward to working with him and the PRPA to see that this financial support leads to thousands of family sustaining jobs for Philadelphians,” added Mayor Kenney. “This is a tremendous opportunity for our city.”

A total direct job increase of 70 percent is projected from the current level of 3,124 to a projected 5,378 direct jobs. Total employment at the Port will also increase, from 10,341 to 17,020, and state and local tax revenues generated will increase from the current $69.6 million to $108.4 million annually.

About $200 million of the Capital Investment Program is being invested in the Packer Avenue Marine Terminal, PhilaPort’s largest maritime facility. These improvements will include four new electric post-Panamax container cranes, the relocation of warehouses to facilitate container growth and the construction of new ones, and a deeper 45-foot depth at the terminal’s marginal berths, to match the new 45-foot depth of the Delaware River’s main channel. Electrification throughout the terminal will also be modernized to support electrification of existing diesel cranes and cold ironing capabilities at the terminal (the ability to power without the need for the vessels to burn fuel while docked).

The improvements at the Packer Avenue Marine Terminal are occuring at about the time that the Delaware Main Channel Deepening Project, which is deepening the Port’s main shipping channel from 40 to 45 feet, will be completed. The larger, deeper-draft container vessels that will be able to reach the Port because of the deepening project (as well as a recently improved Panama Canal) will now find a terminal that is especially prepared for their needs.

“Our thanks to the Governor for his belief in the ability of the Port to grow and compete,” said Tom Holt, Jr. of Holt Logistics, the parent company of Greenwich Terminals, LLC, which operates Packer Avenue Marine Terminal. “These capital improvements, which we’ll complement with our own additional improvements, will allow us to serve the world’s ocean carriers, and the customers those carriers serve, better than ever before. It will also position us as one of the fastest growing container ports on the East Coast.”

The Port’s Automobile Import/Export facility, which currently processes 150,000 cars and employs more than 300 direct workers will also benefit by receiving about $90 million of the Governor’s Capital Investment program. Since 2010, Glovis America been the main customer of the Port’s Auto Processing facility, located in South Philadelphia adjacent to the Packer Avenue Marine Terminal, bringing Hyundai and Kia automobiles on vessels for eventual distribution to dealerships throughout the region.

Improvements to the Port’s automobile-handling operation will include the addition of 155 paved and fenced acres above the flood plain at the Port’s Southport site; the conversion of the former seaplane hangar at Southport into a second auto-processing site; enhancements at the main auto-processing site at Pier 98 Annex; and the establishment of a framework that provides flexibility for use of the land the Port needs for containers and automobiles, as determined by market demands.

“We are grateful to partner with the PRPA and the Commonwealth to create a world class destination auto port to that will meet our needs for Hyundai and Kia as well as providing the ability to expand into auto exporting” said Glenn Clift, President and CEO of Glovis America, Inc. “The addition of space and ability to consolidate our foot print at the port improves our ability to make Philadelphia an aggressive cost competitive port. It also ensures our long-term commitment to grow jobs and revenues in the Commonwealth.”

All photos courtesy of PhilaPort.