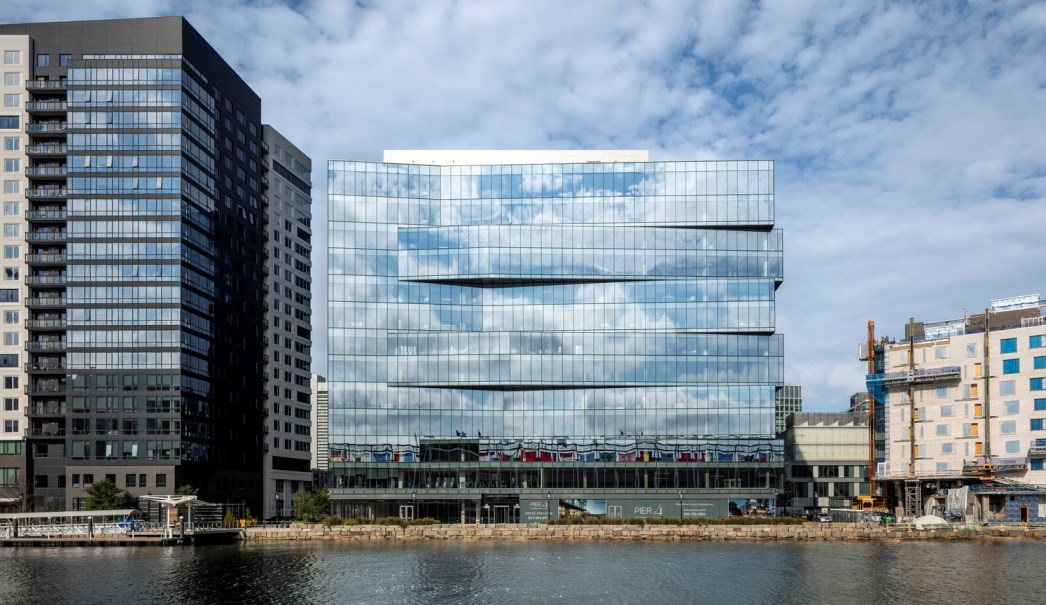 On the revitalized waterfront of Boston, Massachusetts, the redeveloped Pier 4 complex includes two buildings, one an office building and the other a condominium building. 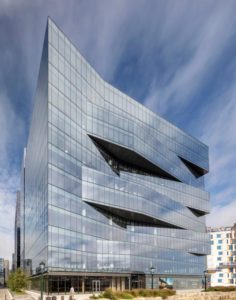 Designed by Elkus Manfredi Architects, the office building is a striking addition to the architectural landscape of the Seaport District as visible from the water and the new Seaport District neighborhood.

The building’s waterfront prime location determined the design of an iconic building that would have high visibility from the Harbor, from the city and within the Seaport neighborhood.

The building’s modern glass and steel exterior provides two distinct and different signature façades one facing the harbor and the other facing the city.

The West façade, facing Boston, has a more subdued gesture.

It opens up to the city with a convex façade and having its three main features, the main entrance, a trapezoidal cut-out terrace at the fourth floor facing the Institute of Contemporary Art museum, and an open to the sky Penthouse terrace. 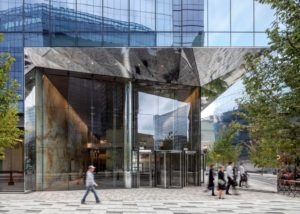 The East Side, facing the harbor in a more intimate way, have these two story undulating triangular moves that shift and slide between each other, creating a constant movement that changes though out the length of the day.

At night, the underside of the waves is lit up continuing to show this same effect causing a reflection on the harbor and the pedestrian walk below. 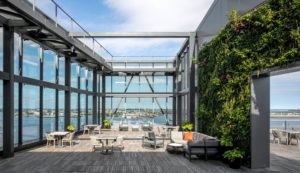 To achieve an oversize dimension of the glazing units (IGU) without the use of visible horizontal mullions, an intermediate transom or ‘kiss mullion was introduced.

This allowed uninterrupted sleekness to the curtain wall surface

The office lobby is located in the center of the building creating a public corridor from east to west serves as an important element in the public access requirements of the building, creating permeability through the building.

Elkus Manfredi Architects has been central to the redevelopment of Boston’s Seaport District since 2010. That year, with its initial project One Marina Park Drive, the firm raised the architectural standards for mixed-use buildings in the area. 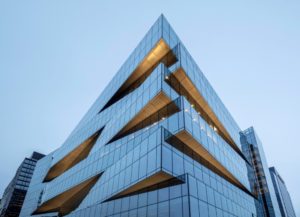 Elkus Manfredi’s next District project, Liberty Wharf, was completed in 2012.

Liberty Wharf is a lively waterfront restaurant/office complex that strategically reinstated a missing section of Boston’s famed HarborWalk and has been recognized with a number of design awards, including the Preservation Achievement Award of the Boston Preservation Alliance.

Elkus Manfredi has since played a substantial role in ongoing urban planning, and architecture in the Seaport: in a three-square-mile area, the firm is responsible for over six million square feet of new and re-purposed space, including retail, office, life science, hospitality, and mixed-use.