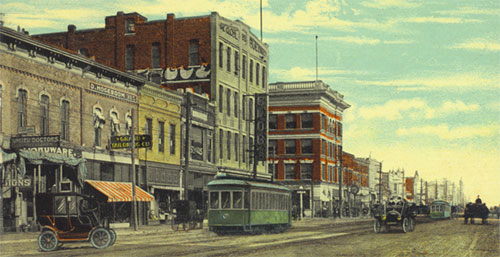 Pittsburg, Kansas is turning to its rich history as a mining and manufacturing hub to forge a plan for sustainable growth.

After decades of stasis, it’s growing fast — it’s expected to add 1,200 new residents each year through 2018. Unchecked, that growth can be a mixed blessing, but Pittsburg’s leaders are looking to their past to develop a strategy to harness it for sustainable prosperity.

Pittsburg will rehabilitate its urban core through comprehensive planning efforts currently underway. At city hall, a placard shows off the city’s ideas for a local clay plant, including a coal mining museum, a recreational park, a vibrant shopping district set among a canopy of rehabbed brick chimneys, or all of the above.

Downtown property owners have ripped out dropped ceilings, revealing ornate tiling and the 15- to 20-foot original ceilings that are coveted by designers and developers. Their work is more a reveal of lost beauty than it is a renovation.

“We’re trying to take what’s here and repurpose it,” says John Long, an auto mechanic and downtown property owner who attended the workshop, and who has already renovated several historic buildings.

Pittsburg was platted on May 20, 1876, eight blocks long, eight blocks wide. Franklin Playter, a 24-year-old Canadian who formerly had been a farmer, teacher and lawyer, was now a Girard banker. Two mining entrepreneurs had approached him from Joplin, who wanted him to finance a railroad from their lead and zinc mines to the railroads of Kansas, preferably those in Cherokee.

Since they owned most of that little town, they offered him half-interest in their holdings as an inducement. Playter, however, knew that what is now Pittsburg was in the center of a rich coalfield. He agreed to build a road, provided it went from Joplin to Girard. The resulting Joplin-Girard Railroad passed directly through the center of the Cherokee-Crawford Coal Field.

Since Playter envisioned an industrial city on this site, he decided to name the place Pittsburg after the industrial capital of Pennsylvania. The only trouble was that four years earlier, in 1872, W. A. Pitt had named his north central Kansas town after himself, Pittsburg. Located in Mitchell County, 21 miles southwest of Beloit, it had a population on 200.

Although Playter offered him good money, Pitt hesitated in giving up his name to the town, so until negotiations were completed on June 1, 1881, Playter’s village was called New Pittsburg. Upon the purchase of the name in 1881, the former Pittsburg became Tipton and Playter’s town finally after five years became simply Pittsburg.

Today, Pittsburg’s growing network of bike lanes is reconnecting the clay factory, the downtown, and Pittsburg State University’s nearby campus of 8,000 students. Their main street downtown is lined with Art Deco hotels, masonic stonework, and two- and three-story storefronts sometimes dating to the late 19th century.