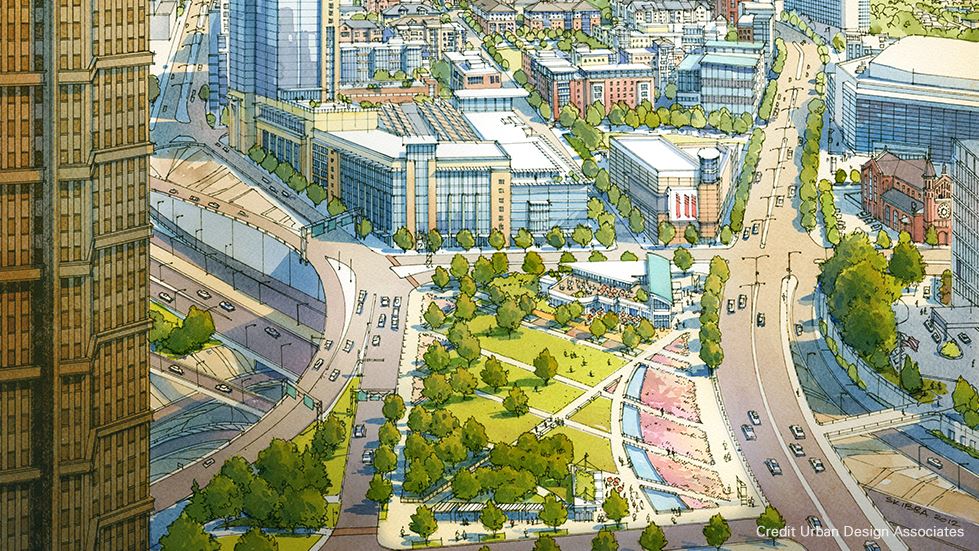 In yet another step in Pittsburgh, Pennsylvania‘s ongoing downtown revitalization, the city (after 8 years of planning and fundraising) is finally on the verge of building a pedestrian park over the destructive Crosstown Boulevard. This will reconnect the Lower Hill District to the Downtown after having been severed from it over 60 years ago by this badly-planed urban highway.

The I-579 Cap Project will provide for a structure over a portion of the below-grade I-579 Crosstown Boulevard highway. The 3-acre Cap is a “ladders of opportunity” project for the economically disadvantaged Hill District community. The Cap will be transformative for the Hill District by removing a physical barrier and re-establishing connectivity to centers of employment, education and services in Downtown Pittsburgh. 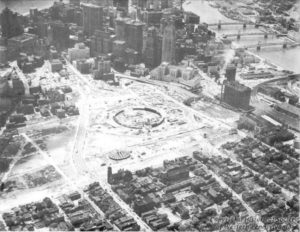 Demolition of Lower Hill District in the 1960s.

The historic Lower Hill was once a vibrant, densely populated neighborhood and an active part of the predominantly African‐American Hill District community until it was cleared in the name of “urban renewal”.

After World War II, planners and city leaders declared the Lower Hill “blighted” (due primarily to the residents’ skin color) and by 1956, 413 businesses and over 8,000 residents were forced to relocate, and 1,300 buildings on 95 acres of land were demolished. Only a new public auditorium (known as the Civic Arena), an apartment building and an apartment/hotel complex were ever built. The remaining land was never developed and what once was a thriving community became mostly surface parking.

Also during this tragic period, the I‐579 Crosstown Boulevard was constructed on the border between Downtown and the Hill District. It created a trench separating what was left of the Hill District from the economic activity and cultural life of Downtown. The highway shifted traffic patterns and further isolated and divided the neighborhood from Downtown.

The Hill District population dropped from 53,648 in 1950 to 9,457 in 2013. The Hill District consisting of Crawford‐Roberts, Middle Hill, Upper Hill, Bedford Dwellings and Terrace Village census tracts is now a severely distressed neighborhood. Unemployment is over 21.2%, the median household income is $18,827 and 41.0% of the residents live below the poverty line. The Project will help to repair these injuries of the 1950s by building a Cap structure over the below grade highway, and in so doing extend the economic strengths of Downtown to the Hill District. 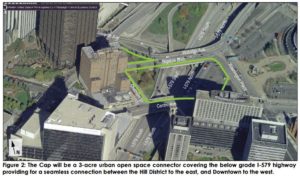 Now, the I-579 Cap will now create convenient and accessible pedestrian and bicycle pathways that will connect to a transit and free subway system in Downtown. The Cap will revitalize the Hill District by providing for the safe movement of commuters and residents, and supporting public and private development.

In a TIGER grant funding request sent to the House Transportation and Infrastructure Committee, the city said construction of I-579 “essentially decapitated the Lower Hill neighborhood from the rest of the city. Mobility between the two was either unsafe or eliminated.”

In the request, Rep. Mike Doyle, D-Forest Hills said, “Pedestrians and bicyclists are forced to either travel a great distance around several blocks to negotiate a path into [or out of] Downtown or risk a very narrow and dangerous curb on an existing overpass across I-579.”

See full article by Anthony Conroy in the Pittsburgh Post-Gazette.