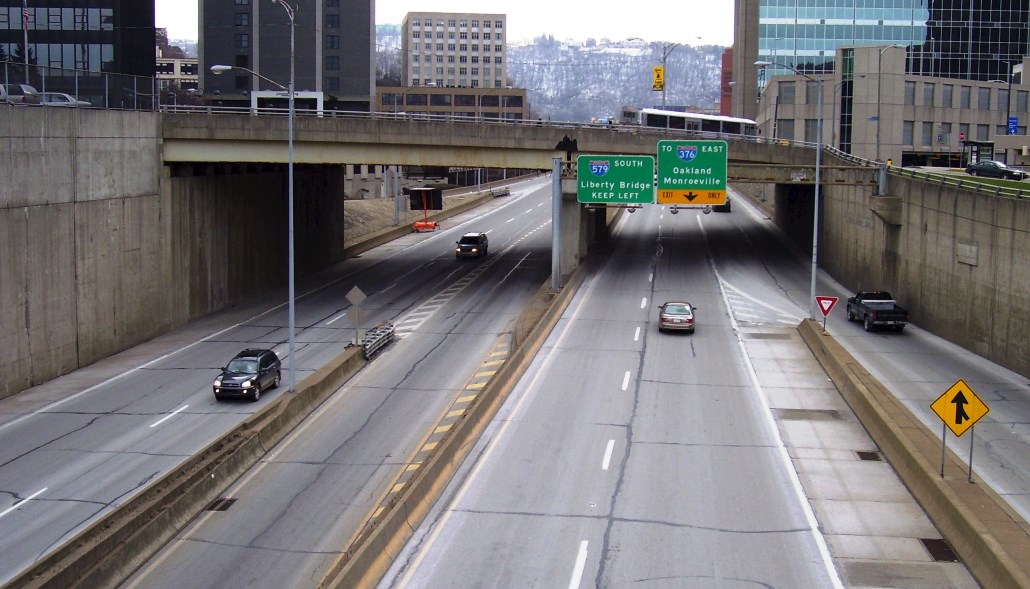 On October 10, 2019, construction began on the healing of a part of Pittsburgh, Pennsylvania that was fragmented half a century ago by a badly-planned urban highway.

A 3-acre public space over Interstate 579 will be created to form a new, urban green space that will reconnect the city’s historic Hill District with the city’s downtown business and cultural center. In other words, it’s a good example of the 3Re Strategy (repurpose, renew, reconnect) in action.

The $32 million tree-lined park will function as a cap over Interstate 579, providing a walkable link to a neighborhood that lost its direct access to Downtown Pittsburgh over 50 years ago as a result of urban renewal and federal highway projects.

Awarded a $19 million federal grant through the Transportation Investment Generating Economic Recovery (TIGER) program, the pedestrian park is being constructed on top of a bridge-like structure. The park will include “story” walls featuring the history of the Hill District, performance and green spaces, an outdoor classroom space, bike pathways, an amphitheater, and a bike-share station.

Green infrastructure will enable stormwater capture with rain gardens, native trees, shrubs, and grasses also helping to reduce noise from the interstate below. The park’s pedestrian and bike-friendly path system will be ADA-accessible. HDR Engineering, with LaQuatra Bonci Associates, the landscape architect subcontractor, have created the park’s design with input from the Hill District community.

Sustainability features will include permeable lawns to capture stormwater that currently runs off the concrete pavement of I-579. The lawn’s soil composition can absorb up to six inches of rain water.

Additionally, a system of open trench drains will capture storm water and re-direct it to six rain gardens located in the lower northwest corner of the site. The rain gardens and lawn detain the water and encourage it to evaporate, to be absorbed by plants or to slowly infiltrate back into the public drain system.

There will be a net reduction of stormwater discharge to the public storm sewer system from current conditions. .The project will comply with the City of Pittsburgh Clean Diesel Emission requirements.

Righting a Wrong: Reconnecting The Hill to Downtown Pittsburgh

In the 1950s and 1960s, construction of the former Civic Arena, in concert with other development activities, led to the demolition of entire blocks of homes and businesses in the Lower Hill neighborhood, essentially separating the Hill from Downtown Pittsburgh and displacing more than 8,000 residents.

Photo of the urban planning disaster known as I-579 running through downtown Pittsburgh (via Enlightenedment at English Wikipedia).

Learn more about the green redevelopment of Pittsburgh on the Pittsburgh Green Story website.