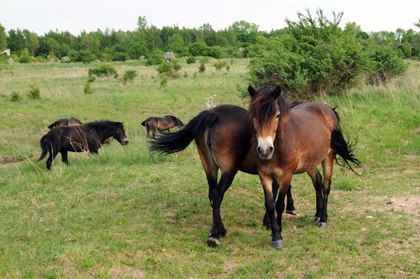 In a land run barren by communism’s modern farming concepts, there’s a great need for healing, says a group of Czech environmentalists.

But thanks to 15 sturdy bay and brown ponies that have recently arrived in a north central region of the Czech Republic, that’s all about to change.

“This isn’t just about rewilding our central European territory,” said Miloslav Jirku, PhD, of the Biology Centre of the Czech Academy of Sciences. “It’s not about bringing animals here because we want them here or because they used to be here. We’re bringing them here because we need them here.”

Restoring land that’s been barren for 70 years is no easy task for these environmentalists. But three species of herbivores—cattle, European bison, and horses—are being called to duty.

It’s a decision based on more than five years of careful study of the needs of the land, the animals, and the people.

Eight months into the project, Jirku said he’s pleased with the progress. “The horses have all adapted very well, most of the mares are apparently in foal, and numerous endangered plants and animals are already returning, much faster than we expected,” he said.