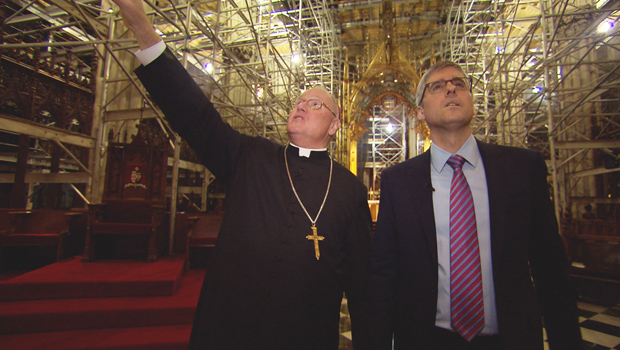 Pope Francis saw the truth of the saying “What’s Old Is New” when he visited St. Patrick’s Cathedral in New York City on September 24, 2015.

To build St. Patrick’s, Archbishop John Hughes turned to James Renwick, Jr., designer of the Smithsonian Castle in Washington, D.C., and considered the premier American architect of the time.

It took more than 25 years of mostly immigrant labor to realize Renwick’s vision, and when its twin spires were completed in 1888, St. Patrick’s stood as the tallest building in New York City.

But after years of neglect, the Cathedral was showing its age. “This Cathedral, simply put, is cracking,” the Cardinal said before his congregants. “The bricks are crumbling and falling.”

Which is why in 2012 Cardinal Dolan announced a restoration of St. Patrick’s, at an eye-popping price tag ($175 million) at the same time that parishes and schools are being closed. “Here’s the only answer I can give: We had to do it. It was survival,” said Dolan.

Pope Francis’ journey to St. Patrick’s marked the fifth time a pope has come to the Cathedral.

No other church outside of Italy has hosted more papal visits — a tribute to America’s parish church, now restored to its original luster.