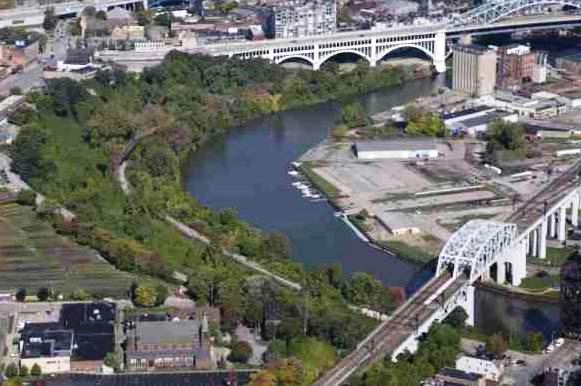 The soggy, unstable slope on the city’s West Side known as Irishtown Bend has thwarted redevelopment along West 25th Street in Ohio City for decades over fears that a landslide there could erase roads and a major sewer line and possibly even block shipping on the Cuyahoga River.

Irishtown Bend is an overgrown stretch of the river near the West Side Market that is entering its first phase of redevelopment with the stabilization of the hillside..

On February 9, 2017, the Port of Cleveland took a big step toward shaping a new vision for the crumbling Irishtown Bend hillside, which could become a 17-acre park on the Cuyahoga River with superlative skyline views and links to the Towpath Trail and Whiskey Island on Lake Erie.

The Port board voted to appoint a design team for the project, led by the Cleveland office of the engineering firm of Michael Baker International, with the San Francisco-based landscape architecture firm of CMG.

The Port and partnering agencies view a future park on the site as a huge civic and economic boon that would accompany a separate, $49 million project to stabilize the Irishtown slope. The river’s $3.5 billion shipping industry supports 20,000 jobs.

In addition to the park itself, the plan will examine:

Irishtown Bend got its name because the swampy area was first developed during the 1830s by immigrant Irish who came to the area as laborers for the construction of the city’s railways and canal. Many soon found work on the bustling city docks, or in the growing industries. The area was characterized by the extreme poverty of the outcast Irish, the majority of whom lived in nothing more than flimsy shacks on the hill side above the river. The constant threat of disease in the swampy land along the river and the backbreaking work most engaged in made life in Irishtown tough. Life was centered on 10- to 12-hour work days, their community, the pub, and their faith.

Due to their outcast status in Cleveland society, the Irish formed a very close knit, closed neighborhood. Increased immigration during the 1840s and brought more of their countrymen to this west side community, causing it to expand. The neighborhood became known as the Angle, including old Irishtown and Whiskey Island. In the 1860s St. Malachi Church was built in Irishtown, with St. Patrick’s built earlier a little further west. With continued growth the Irish expanded as far west as West 65th Street adding a third parish, St. Colman’s, in the 1880s.

In this time the Irish had gained some upward mobility in society. Increased industry, job opportunities, as well business of their own allowed for economic growth in the community. However the Angle, especially Irishtown, remained the poorest area. Many families in Irishtown still lived in shacks on stilts on the hillside of the diseased and polluted Cuyahoga River. This remained the case until into the early 20th century.

As the Irish of Cleveland began to join the ranks of the middle class, they left Irishtown and headed for the western suburbs of Lakewood, Fairview Park and West Park (now a neighborhood of Cleveland). The homes that were left behind would become inhabited by Hungarian immigrants for a brief time, then abandoned. Most of the structures were demolished with only a handful of them remaining today.