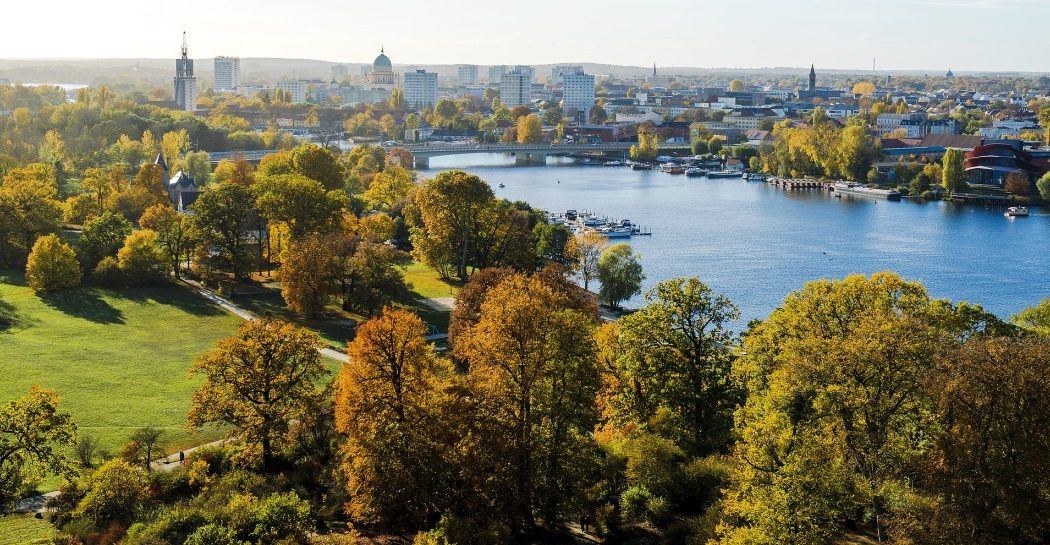 In Germany, Potsdam is the capital and largest city of the state of Brandenburg. It directly borders the German capital, Berlin, and is part of the Berlin/Brandenburg Metropolitan Region. It sits on the River Havel, about 25 kilometers (16 miles) southwest of Berlin’s city center.

Potsdam was a residence of the Prussian kings and the German Kaiser until 1918. Its original planning embodied ideas from the Age of Enlightenment: through a careful balance of architecture and landscape, Potsdam was intended as “a picturesque, pastoral dream” which would remind its residents of their relationship with both nature and reason.

Not surprising then, that the city’s economy developed a strong creative component. For instance, Babelsberg (in the south-eastern part of Potsdam) was already, by the 1930s, the home of a major film production studio and it has enjoyed success as an important center of European film production since the fall of the Berlin Wall. The Filmstudio Babelsberg is the oldest large-scale film studio in the world.

An another aspect of creativity and knowledge-based economic growth, Potsdam developed into a center of science in Germany in the 19th century. Today, there are three public colleges, the University of Potsdam, and more than 30 research institutes in the city. The parks and palaces of Sans Souci comprise the largest UNESCO World Heritage Site in Germany.

Over the years, the original plan for the city center fell by the wayside, however, with rebuilding after WWII being a major factor. The heart of the city became congested, and lost many of those Age of Enlightenment qualities. 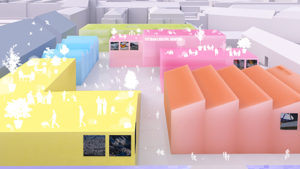 Now, Rotterdam-based design firm MVRDV has won a competition to masterplan a new cultural and creative quarter for the heart of Potsdam. It will offer creative people sustainable and affordable workspaces while spotlighting the city’s innovation, economic power, and cultural quality of life.

MVRDV’s design restores the historic town layout by reinstating the urban block and incorporating existing historical structures, while adding a new and vibrant atmosphere to the block through the project’s concept based on the idea of a village.

“This is truly a project supported by the public of Potsdam,” says Sven Thorissen, director at MVRDV.

“Once the city of Potsdam determined that this block should be given a cultural and creative purpose, an intensive participatory process began in which politicians, the project developer, the architects and future users work together. The concept for the design, ‘the Village’, emerged because of the flexibility it offers, the density of diverse functions and because it allowed for more space for small-scale creative businesses than had been requested,” he added.

Here’s what MVRDV says about their winning design: 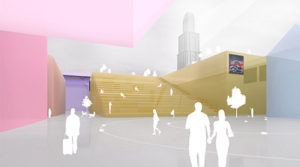 The concept designed by MVRDV for developer Glockenweiß convinced the competition committee thanks to its creation of considerably more space for the creative scene than was required in the tender.

The masterplan proposes two perimeter buildings at the edges of the urban block, as envisaged by the development plan, but the inner courtyard – originally foreseen as an empty square – will be used for an innovative mix of functions, creating a spatial density that will allow for small-scale interventions and thus guarantee more intimacy as well as diversity.

The ensemble of buildings helps to provide a total of 24,400 square metres of floor space, 6,950 square metres of which will be affordable rental space, offering far more affordable space to the small-scale cultural and creative industries than was originally expected. By introducing different building volumes, a spatially diverse quarter is created with alleys, courtyards, green roofs, and squares. It creates a variety of possibilities for interaction and is an expression of the diversity of its users, while also going beyond the original requirements of the brief with additional functions such as catering, a kindergarten, and conference and exhibition areas.

The new creative quarter Potsdam will be built in three construction phases. First, affordable studio space will be realized in 2023 to provide a seamless transition for the artists now located in the Rechenzentrum. The first construction phase will involve the creation of a building on the site of the former Langer Stall, based on the original building volume and incorporating the building’s preserved end façade. The second phase covers the realization of the Village buildings within the building block. In a last phase a housing block along the Werner-Seelenbinder Strasse will complete the ensemble.

The masterplan includes a comprehensive sustainability concept, with key elements including the integration of public and private green spaces, the use of recyclable materials, the integration of elements for sustainable energy generation, and the communication of a new and adaptable mobility concept. Starting from the already-excellent pedestrian and public transport connections of the inner-city location, the planned footpaths and cycle paths of the creative quarter will be supplemented by an electric car-sharing scheme, reducing the need for private car ownership among the tenants of the area.

The next phase is a competition that will define the architectural elements of the masterplan. Construction is expected to start in 2021.

Featured photo (by Kai Vogel via Wikipedia) shows the skyline of Potsdam viewed from Babelsberg Park. All renderings courtesy of MVRDV.