With less than a month left until the start of the Rio Olympics in Rio de Janeiro, Brazil, the number of tourists in some of the best located slums of the city is steadily rising.

Babilônia, near Copacabana beach, boasts a breathtaking view over the Atlantic ocean from high above the shore. However, not all slum communities are experiencing the positive effects of gentrification.

The effects of urban renewal and gentrification projects involving the favelas are a something of a double-edged sword.

In 2009, Rio de Janeiro police pioneered the project, reclaiming territories controlled by gangs of drug dealers with its law enforcement group called Pacifying Police Unit (Unidade de Polícia Pacificadora – UPP). In the aftermath of this project, given the excellent location and stunning views, Babilônia became a hotspot for favela tourism.

Yet the increase in tourism and the pacification project is not necessarily being well received by the traditional residents of the favela.

The Guardian has reported that since the UPP pacification project, rent prices have doubled. While safety and security prevails, higher rent prices are restricting the social mobility of low-income individuals. 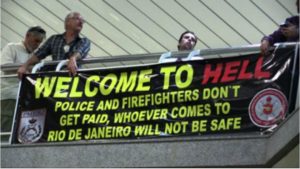 But favela residents aren’t the only ones with concerns. The police have their own complaints.

On July 4, 2016, tourists encountered banners saying “Welcome to Hell! Police and firefighters don’t get paid, whoever comes to Rio de Janeiro will not be safe.”

And athletes have their own worries, especially those involved in water events: the bay in which they will be competing is a pool of raw sewage and industrial contaminants.

This despite the city’s promises to the Olympics committee to restore the bay’s health prior to the games.

Photo of Babilônia favela via thesundaytimes.co.uk

Photo of bay via cbc.ca

See article about Rio’s failure to restore health of bay.