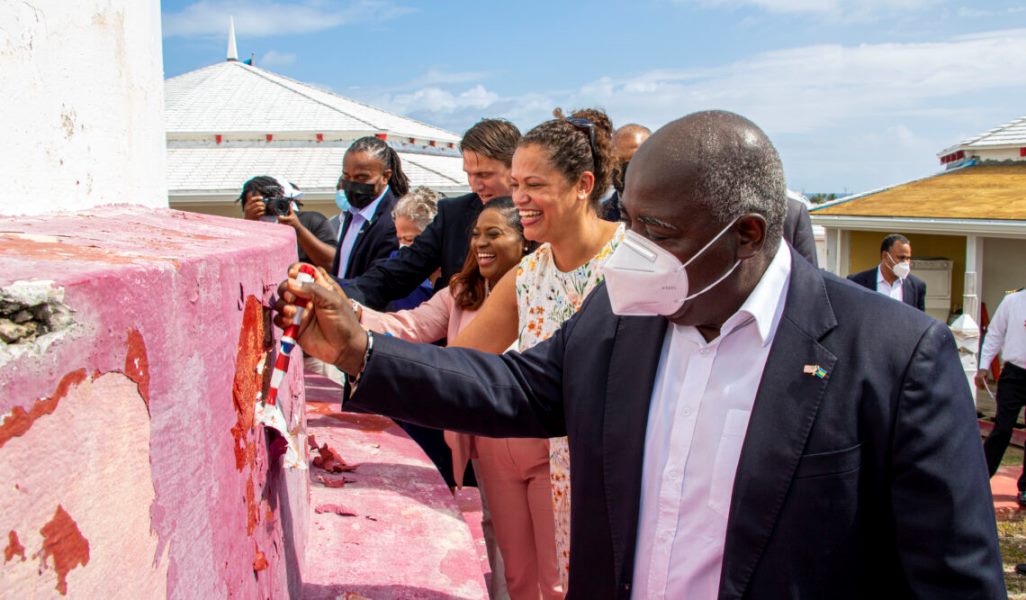 Constructed in 1863, the iconic red-and-white Elbow Reef Lighthouse is the last of its kind left in the world. Located in Hope Town on Elbow Cay in Abaco, Bahamas, the historic hand-operated, kerosene-burning lighthouse has aided navigation for 158 years.

While other similar lighthouses have all been automated, Elbow Reef still operates much as it has for over a century and a half. A lighthouse keeper must climb 101 steps to the top of the tower and light the kerosene-fueled burner by hand. He then hand-cranks a weight system that slowly drops to keep the lantern turning, much like an old grandfather clock.

Kerosene feeds the flame in the old burner, and a massive Fresnel (pronounced “freh-NELL”) lens system projects a powerful beam of light visible up to 23 nautical miles away, helping sea vessels avoid the shallow waters and the vibrant coral reef off Elbow Cay. 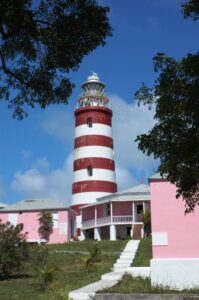 Photo of Elbow Reef Lighthouse is by Colombiano via Wikipedia.

Now, on February 18, 2022, U.S. Embassy Nassau Chargé d’Affaires Usha Pitts, Prime Minister the Honourable Philip “Brave” Davis, and other U.S. and Bahamian government officials and stakeholders gathered on the lawn in front of the iconic Elbow Reef Lighthouse to inaugurate the Elbow Reef Lighthouse Restoration Project, made possible by a grant from the U.S. Ambassadors Fund for Cultural Preservation (AFCP) worth over $472,000 dollars.

Through the AFCP, the United States is partnering with the Elbow Reef Lighthouse Society and the Elbow Reef Foundation to restore this iconic and historic landmark, which has stood on Elbow Cay for 158 years.

Regular weathering and wear, compounded by the devastating force of Hurricane Dorian in 2019, have taken a toll on this cultural treasure.

The grant will help fund repairs to the interior original slate floors, the sophisticated Fresnel lens that focuses a beam of light visible for up to 23 nautical miles, and restoration and re-painting of the iconic red-and-white candy-colored exterior.

Chargé Pitts reminded the audience of gathered dignitaries to “remember that this is an important historic marker… of our shared human history.”

PM Davis remarked that “Lighthouses offer hope […] filled with the knowledge that some other human soul, people we may never meet, have invested so heavily to protect the journeys, and lives, and well-being of strangers.”

He said that the restoration of the Elbow Reef Lighthouse is yet another dimension of the enduring friendship between The Bahamas and the United States, and honors the architecture, history, and culture of The Bahamas, while supporting Bahamian livelihoods.

PM Davis noted that the lighthouse keeper’s labor to protect others “speaks to a profound sense of humanity. They are hopeful example of the best in us.” It is this spirit that embodies the work to preserve and protect the Elbow Reef Lighthouse.

Restoration will not only help preserve a historic landmark, it will also continue to strengthen tourism and economic activity in an area devastated first by Hurricane Dorian, and then by the COVID-19 pandemic. The Elbow Reef Lighthouse Society and the Elbow Reef Foundation will implement the nearly half-million AFCP grant and oversee the restoration project.