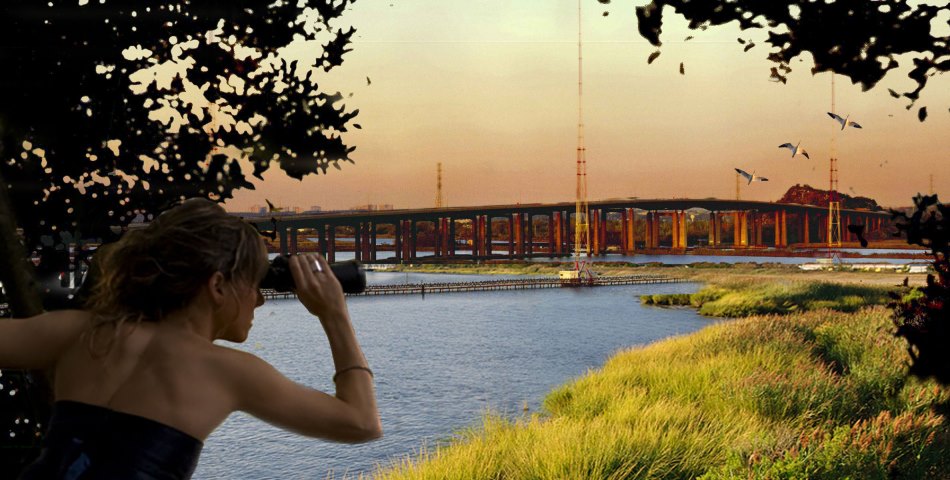 Despite decades of neglect and over-development, the New Jersey Meadowlands—long the favorite body-dumping site for organized crime in the New York City-area—remains the largest remaining wetland system in the region.

It’s also likely to be one of the first places in the U.S. to be completely and permanently inundated by sea-level rise. Rob Freudenberg, VP for energy and environment at the Regional Plan Association, says the New York-area research and planning nonprofit is proposing that the Meadowlands be given a Climate Change National Park designation. 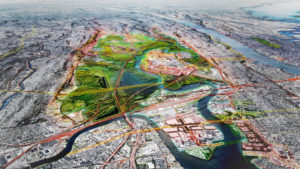 He says the state of New Jersey should work with the federal government to make the Meadowlands a national park that demonstrates how properly managed natural landscapes can help mitigate the impacts of climate change.

A national-park designation would also help preserve and restore the Meadowlands’ natural habitats, protect nearby communities, and make it a recreational resource for the entire region.

The immense concentration of infrastructure that exists in the Meadowlands—warehousing and distribution facilities, commuter and intercity rail, roads and bridges, energy transmission facilities—is vital to the economy and transportation needs of the tri-state region, and indeed the entire Northeast.

But by the end of this century, permanent flooding from sea-level rise will likely displace between 4,000 and 8,000 Meadowlands residents, and cost 51,000 jobs (as defined by today’s district). The lives of another 40,000 people will be disrupted by periodic flooding from increased precipitation and storm surges, while infrastructure will be threatened by more frequent flooding and saltwater intrusion—a particularly vexing problem given the area’s concentration of hazardous-waste sites.

The Meadowlands is one of the Northeast’s largest remaining contiguous tracts of urban open space, one that supports a wide array of wildlife and biodiversity. Although it is a scarred vestige of what it once was, the Meadowlands still provides critical ecosystem functions, including nutrient cycling and flood storage, while supporting critical fish and wildlife biodiversity. The Meadowlands has been designated as a regionally significant natural resource by the U.S. Environmental Protection Agency and the U.S. Fish and Wildlife Service.

National parks are typically selected for their natural beauty, unique archeological features, or historical significance. The Meadowlands represents a new opportunity for the National Park Service to identify and promote the value natural landscapes can provide in protecting people from the effects of climate change.

Designating the Meadowlands a National Park would make a strong statement about the role public institutions can play in climate change resilience. Leadership from the public sector on climate change has been inconsistent. The National Park Service, among the more well-established and trusted institutions in the country, could turn the tide and persuade other agencies to prioritize climate resilience.

For 90 years, the Regional Plan Association (RPA), an urban research and advocacy organization, has been a source of ideas and plans for policy makers and opinion-shapers across the tri-state region. RPA works to improve the prosperity, infrastructure, sustainability and quality of life of the New York-New Jersey-Connecticut metropolitan region.

Some of the region’s most significant public works, economic development and open space projects have their roots in RPA ideas and initiatives, from the location of the George Washington Bridge to the revitalization of downtown Brooklyn, Stamford and Newark to the preservation of open space and development of parks in the Palisades, Governors Island and Gateway National Recreation Area.

RPA has pursued these goals by conducting independent research, planning, advocacy and vigorous public-engagement efforts. Every year, the most pressing challenges facing the region are debated at RPA’s spring conference, the Assembly, which draws leaders and professionals from government, business, civic groups and the media.

A cornerstone of RPA’s work is the development of long-range plans and policies to guide the region’s growth. Since the 1920s, RPA has produced three landmark plans for the region and is working on a fourth plan that will tackle the urgent challenges facing the region, including climate change, fiscal uncertainty and declining economic opportunity.