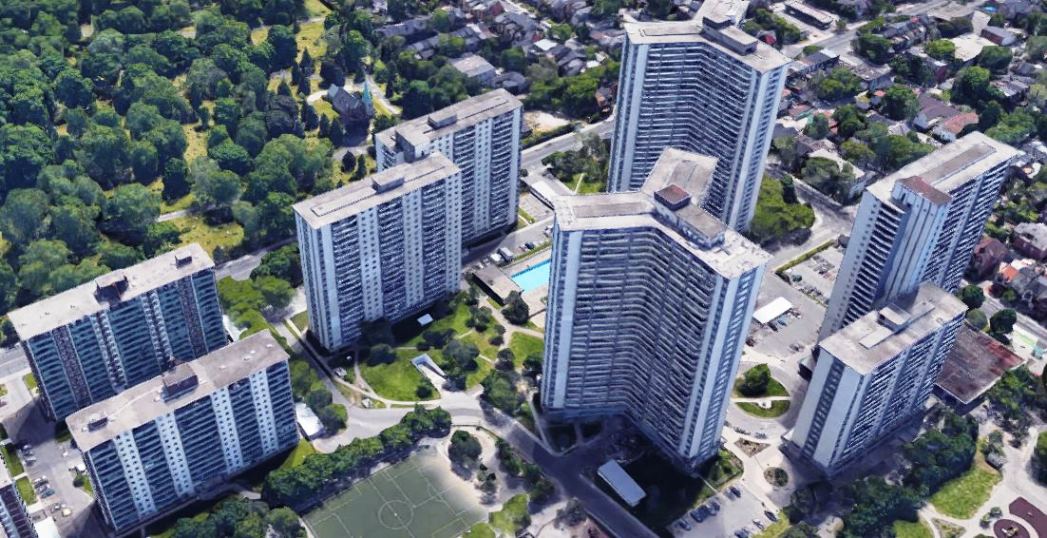 The enormous and somewhat overwhelming grey and white slabs of St. James Town in Toronto, Ontario, Canada were a once considered by many a progressive example of urban renewal when they were first constructed in the mid-1960s. They were inspired by Le Corbusier’s “Towers in the Park” planning concept of the time. 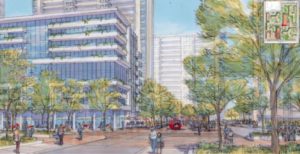 Five of these residential towers in a rectangular area at the southeast corner of St. James Town (the right side of the image above) comprise what is called Wellesley-Parliament Square. They were the first of their kind in Toronto, replacing the traditional urban fabric of the time, which mostly comprised single-family homes on a grid of public streets.

Today, the St. James Town neighbourhood, and the Wellesley-Parliament area in particular, is a melting pot of many of Toronto’s “new Canadians” (immigrants), and is one of the City’s most diverse communities.

But the park element of the original design seems to have been forgotten over the decades. The site now comprises mostly concrete paving, passive open spaces, surface parking areas, ramps to underground parking, and scatterings of fenced-off above-ground garbage and loading areas.

Now, a redevelopment proposal offers to green, renew and reconnect the site to revitalize it, while adding 900 new infill residential units to underutilized spaces.

The plan would rebuild and integrate the spaces among the buildings, add wide pedestrian paths and separate bicycle lanes, and create a new road to ease traffic congestion and better-link the site to surrounding neighborhoods.