On June 19, 2021, the province of Nova Scotia invested $3 million in revitalizing the city of Sydney’s downtown core.

The province is partnering with the municipality, which is also contributing $3 million, in the redesign and upgrade of Charlotte Street to create a welcoming, accessible and green destination. 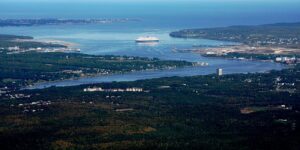 Photo of Sydney Harbour (by Ken Heaton via Wikipedia) shows the Queen Mary 2.

“There has never been a more exciting time for growth in the Sydney area with the anticipated increase in student population, new immigration, new investments and unlimited tourism potential. This project has been on CBRM’s radar for some time, and I am proud that our government is helping to make this a reality,” said Derek Mombourquette, Minister of Education and Early Childhood Development and MLA for Sydney-Whitney Pier, on behalf of Labi Kousoulis, Minister of Inclusive Economic Growth.

The project will help support local businesses and attract new investment in the heart of the Cape Breton Regional Municipality (CBRM).

“There has never been more optimism for the downtown core,” said Premier Iain Rankin.

“The area is being reenergized with a new NSCC Marconi Campus and a second cruise ship berth at the Port of Sydney, and this project will help enhance its marketing position to draw in more residents and visitors and stimulate growth in the local economy,” he added.

Preliminary design details that will be shared with community include:

Develop Nova Scotia will work in collaboration with CBRM and the local community on the project.

“Downtown Sydney is a gem. With this significant investment from the provincial government, this historic commercial district will be ready to welcome the world back again. Rebuilding better and redesigning with accessibility at the forefront will benefit all who visit downtown,” explained Amanda McDougall, Mayor of the Cape Breton Regional Municipality.

The process of building will be participatory and intentional to build local placemaking capacity and encourage inclusive economic participation.

“Investment in places for people, like waterfronts and main streets, which are so often the heart of urban and rural communities, helps grow an inclusive economy and contributes to well-being for residents. For us, developing projects is a means to an end: by building these projects with community, the place we build is better – inclusive, sustainable and reflective of local culture which attracts people, but it also builds community participation, pride and resilience. We can’t wait to get to work,” concluded Jennifer Angel, president and CEO of Develop Nova Scotia.

Construction is expected to begin in April 2022.

Photo of Sydney waterfront by WayeMason via Wikipedia.