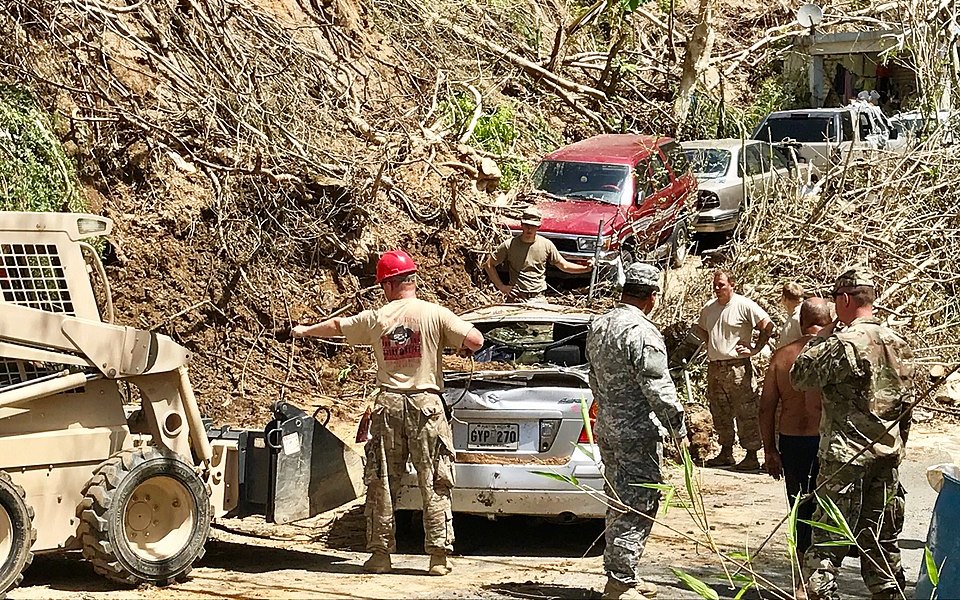 In September of 2017, Puerto Rico was hit by its worst-ever storm: the category 5 Hurricane Maria.

The Trump administration’s lack of effective response was considered criminally irresponsible and blatantly racist by most world leaders and decent Americans. As bad as the immediate death toll (about 3000) of the storm was, the unnecessary deaths caused by Washington, DC‘s subsequent neglect was far worse.

Fortunately, many international charities came to the rescue of these 2.7 million American citizens, and some states—especially New York—helped to fill the gap left by Trump administration’s moral void, but it was far from enough.

One year into the Biden-Harris Administration, Puerto Rico has finally been getting the resilience, restoration and recovery assistance it should have had five years ago.

Here’s a recap of the recent progress:

In 2021, the Federal Emergency Management Agency (FEMA) approved nearly $3 billion in funds for 3,542 projects for Hurricane Maria and earthquake recovery – an unprecedented level of support touching every sector of the island. This builds on ongoing work to restore over 1,000 school campuses, 300,000 streetlights, and essential water, sewer, and electrical lines serving 1.4 million Puerto Ricans. Just this month, FEMA canceled more than $371 million in community disaster loans to Puerto Rico, so that local leaders can focus on recovery and not on paying back federal debt.

The Department of Housing and Urban Development (HUD) obligated ninety percent of promised funds to Puerto Rico, an increase of $16 billion since the start of the Administration, and freed up $1.97 billion to strengthen Puerto Rico’s electrical grid against future disasters. HUD Deputy Secretary Todman’s visit to the island, along with continued collaboration and technical assistance from FEMA and the Department of Energy, reinforced the Administration’s commitment to partnering with the Puerto Rican government, local leaders, and people to achieve a full, equitable, and resilient recovery.

It also provided $4 billion in Fiscal Recovery Funds to Puerto Rico’s commonwealth and local governments, and nearly $3 billion in funds to help Puerto Rico’s schools stay open, address learning loss, and support students. To prevent a wave of evictions and foreclosures, Puerto Rican families received $50 million in rent relief – with more funding on the way – and the Department of the Treasury approved Puerto Rico’s plan to distribute millions in mortgage assistance for distressed homeowners.

Tax and Benefit Parity for Puerto Rican Families and Workers

Additionally, the American Rescue Plan made two important permanent changes to federal tax benefits in Puerto Rico First, it permanently extended the Child Tax Credit (CTC) to families of all sizes in Puerto Rico, from families with three or more children to families with one or more children living in their household, so that the credit is the same as on the mainland. Second, it provided substantial funding to expand Puerto Rico’s version of the Earned Income Tax Credit (EITC). This investment will quadruple the EITC for Puerto Rican workers.

Together, these measures are estimated to provide over $1 billion in tax relief per year. They stand to benefit hundreds of thousands of families – with the families of over 500,000 children eligible for the 2021 expanded CTC. And with many struggling to make ends meet, the American Rescue Plan provided nearly $1 billion in emergency food assistance for Puerto Rico, and the island will see a permanent, annual increase of over $463 million for its food assistance block grant going forward.

In July, the White House hosted the inaugural meeting of the White House Working Group on Puerto Rico, a cabinet-level task force chaired by Domestic Policy Advisor Susan E. Rice, National Economic Advisor Brian Deese, and Director of Intergovernmental Affairs Julie Rodriguez that reports directly to the President and is focused on providing Puerto Rico with the resources and technical assistance it needs to recover and prosper.

Since the inaugural meeting, agencies have been consulting with stakeholders and devising strategies to support the island’s economic development and recovery efforts, promote workforce and educational opportunities, and invest in greater transparency and governance efforts.

The Biden-Harris Administration is committed to addressing the chronic underfunding of Puerto Rico’s Medicaid program and making affordable, quality health care available to its residents. In September, the Department of Health and Human Services (HHS) determined that Puerto Rico will permanently receive nearly $3 billion per year in additional federal Medicaid funding, indexed to inflation.

This additional funding will allow Puerto Rico to continue to invest in its Medicaid program, ensuring access to critical health care services for 1.5 million residents. The Biden-Harris Administration’s funding determination is yet another example of the President’s commitment toward parity for the island.

For decades, infrastructure in Puerto Rico has suffered from a systemic lack of investment. The historic Infrastructure Investment and Jobs Act (IIJA) will make life better for millions of Puerto Rico residents, create a new generation of good-paying union jobs, and spur economic growth that will grow the island’s economy.

In Puerto Rico, the legislation will provide $900 million to rebuild roads and highways; $225 million for bridge replacement and repairs; more than $470 million to improve public transportation; $13.6 million to support the expansion of an EV charging network on the island; a minimum of $100 million to provide broadband coverage across the island; at least $78 million in 2022 alone to improve water infrastructure and ensure that clean, safe drinking water is a right in all communities; and $102 million for airport infrastructure development on the island.

Just this month, the Administration announced it will provide $163 million to restore the Cano Martin Pena urban tidal channel and surrounding areas of the San Juan Bay National Estuary – a project that will significantly improve the health and welfare of the surrounding communities in San Juan by reducing exposure to contaminated waters and sediments, improving water quality, and restoring fish and mangrove habitat.

To date, the Department of Education has awarded or released $6.7 billion in education resources, including funds from the American Rescue Plan. Secretary Cardona visited the island early in his tenure, and the Department of Education formed the Puerto Rico Education Sustainability (PRES) team to provide comprehensive support for improving educational outcomes in Puerto Rico’s students in coordination with stakeholders.

The PRES team is providing technical assistance in fiscal management, program implementation, and school infrastructure rebuilding to the Puerto Rico Department of Education (PRDE) and institutions of higher education across the island. In addition, the Biden-Harris Administration convened an inter-agency working group that is supporting school reconstruction in Puerto Rico through joint technical assistance. The group identifies federal resources that can support ongoing recovery efforts in the education sector and meets with PRDE and their partners.

Strong data collection and analysis is foundational to Puerto Rico’s economic development, improving the delivery of local, commonwealth, and federal government services, and enabling unprecedented federal funds to have generational and transformational impacts for Puerto Ricans. As part of this effort, the Department of Commerce’s Bureau of Economic Analysis (BEA) released its first official estimate of GDP for Puerto Rico.

This new estimate enables the development of a long-term, strategic understanding of the structure of the Puerto Rico economy, and is comparable to BEA’s national, state, territorial, regional, and local-area estimates, as well as internationally. The Biden-Harris Administration is working to support the government of Puerto Rico to increase federal and commonwealth transparency, improve federal and local data collection, analysis, and sharing on the island, and strengthen the capacity of Puerto Rican officials and institutions to deliver services and improve performance.

Investing in a Clean, Resilient, and Affordable Energy Grid

In 2017, Hurricanes Irma and Maria ravaged the Puerto Rican energy grid and caused 80% of the transmission and distribution system to collapse, leaving parts of the island without power for over a year. The Biden-Harris Administration is committed to facilitating the investment needed to construct a modern, reliable, and cost-effective power system in Puerto Rico that is resilient in the face of future storms and supports the accomplishment of Puerto Rico’s renewable energy goals.

FEMA and HUD are working collaboratively with the government of Puerto Rico to administer over $12 billion of federal recovery funds earmarked for rebuilding and improving the energy sector. In keeping with President Biden’s executive orders on tackling the climate crisis and Puerto Rico’s Energy Public Policy Act of 2019, these funds are being used to minimize greenhouse gas emissions and support initiatives in Puerto Rico that focus on mitigation, adaptation, and resilience.

The Department of Energy and FEMA also launched a comprehensive study to evaluate pathways to meeting Puerto Rico’s 100% renewable energy targets in a way that achieves both short-term recovery goals and long-term energy resilience. The study, titled PR100, will be grounded in a commitment to environmental and energy justice and informed by extensive engagement with Puerto Rico stakeholders to reflect the island’s diverse priorities.

The Biden-Harris Administration recognizes that small businesses are the backbone of Puerto Rico’s economy, and has prioritized giving these key job creators the support they need to grow and prosper. The Small Business Administration (SBA) delivered a record-setting $5.2 billion in aid for Puerto Rican entrepreneurs to rebuild, recover, and pivot from the effects of COVID-19 and backed over $89 million in working capital loans for small businesses in Puerto Rico, a 68% increase over 2020.

Additionally, SBA launched two new Women’s Business Centers in Puerto Rico and selected the island as a hub for its new Community Navigators Program to ensure small businesses have access to federal resources and assistance to start, scale, and succeed in their communities. The Biden-Harris Administration is also investing in the jobs and workforce of the future, awarding Puerto Rico a planning grant to increase innovation and job opportunities in the bio-medical sector through the Economic Development Administration’s Build Back Better Regional Challenge, and continuing to invest in skills training through the Department of Labor’s Registered Apprenticeships, YouthBuild, and Job Corps programs.

Photo of Hurricane Maria recovery efforts in October of 2017 courtesy of the South Carolina National Guard.